Those wily British counterparts of mine just won’t stop pushing the envelope. I wrote last week with some pride about how their “Feeding Kids Meat Is Child Abuse” ad made the BBC’s top 10 most controversial ads list—well, according to The Guardian, they’re at it again! Apparently there have been complaints about the anti-KFC ad pictured below. Some nannies are worried (not kidding) that it “breaches the advertising code’s stipulations on responsible advertising, decency and causing fear and distress.” A couple of points here: 1) I’ll admit that the prospect of KFC slicing up defenseless animals is both frightening and distressing, but surely that’s KFC’s fault, no? 2) As PETA President Ingrid Newkirk told the journalist who wrote the Guardian piece about this ad: “The cartoon image of Colonel Sanders killing a chicken on our leaflet is obviously a caricature – a comic. We cannot imagine that our leaflet would provoke fear in anyone unless the reader was a chicken.” ‘Nuff said. 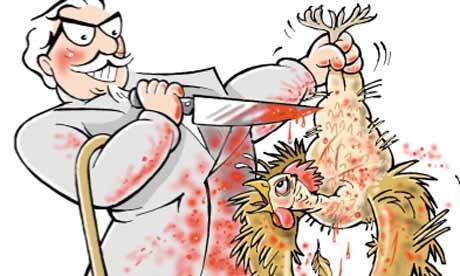