Today, as Japanese fishers began stabbing dolphins with spears and cutting their throats with knives, PETA members, along with members of Earth Island Institute and Ric O’Barry’s Dolphin Project, marked “Dolphin Day” by gathering outside the Japanese Embassy in Washington, D.C., to protest the annual slaughter. 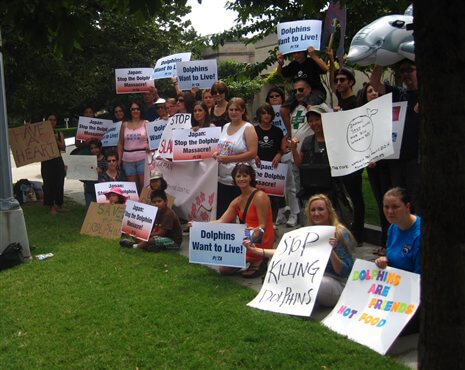 Protesters screened graphic footage from the Oscar-winning documentary The Cove, showing how fishers in the village of Taiji chase entire schools of dolphins into a cove, trap them, and slaughter them as they scream and struggle to escape. The water turns bright red with the dolphins’ blood.

People in many other cities around the world today also protested the slaughter, which will claim the lives of up to 23,000 dolphins and whales over the next six months. The animals are killed because they are considered “pests” by the fishing industry, although a few are captured alive and sold to aquariums and swim-with-dolphins programs, where they will spend the rest of their lives confined to cramped tanks.

You can help stop this by contacting your local Japanese Embassy and demanding that Japan end the cruel slaughter immediately.