Last week, there were a lot of news reports mentioning the fact that President Bush had turned up for a dinner with Saudi King Abdullah wearing a full-length fur-lined robe. It’s probably for the best that there aren’t any available images of this little fashion disaster, but we did confirm that the President had received the robe as a gift from the king, which prompted this response from PETA VP Dan Mathews:

“President Bush should learn from his mother, who refused the offer of a free fur coat for his dad’s inauguration. I can’t imagine he’d embrace the pimp look anyway.”

The damage is done as far as the animals are concerned, but we’re hoping the President will consider donating the robe to our anti-fur campaign. We have a great program in which old furs are given to homeless people who can’t afford to buy coats (the only people who have any excuse to wear fur), so we’d be sure to put it to good use. You can read PETA President Ingrid Newkirk’s appeal to the President here. 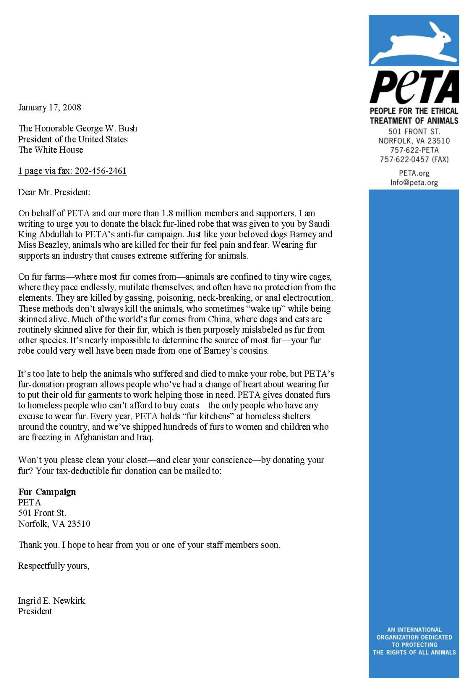