When people weren’t talking about Hurricane Isaac this week, they were buzzing about the Republican National Convention. We’re never ones to miss a chance to get animal issues into the spotlight, so PETA dispatched its famous pigs to the Big Guava, where they’re calling for a federal excise tax on meat. 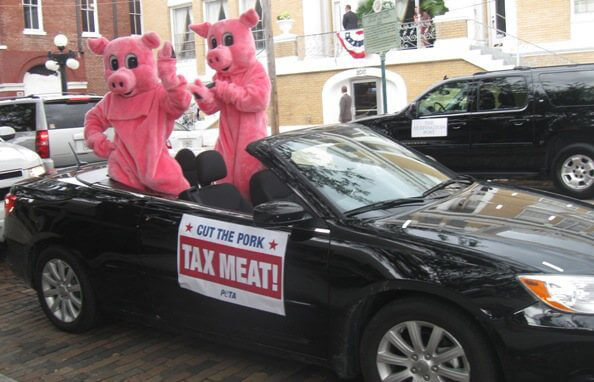 Why? Well, there are “sin taxes” on cigarettes, alcohol, and gasoline. Why shouldn’t there be one on meat, which is as harmful to our health as tobacco and alcohol are—and even more so to the environment? Putting a tax on meat would save countless lives—and not just those of animals.

To keep meat from, well, taxing the Earth, animals, and your body, go vegan. If you’re already lean and green, spread the word by getting your own “Tax Meat” swag.

PETA promotes and educates the public on the benefits of a vegan diet. PETA does not directly or indirectly participate in any political campaign on behalf of or in opposition to any candidate for public office.