CareerBuilder just doesn’t seem to get it. The company—which should spend more time helping people who have been hurt by the recession and less time “employing” chimpanzees who don’t want a career anyway—is once again exploiting apes in its advertisements. So, we were forced to do what we do best: defend the animals. PETA members, including six in chimpanzee costumes, showed up at the company’s Norcross, Georgia, office as people were arriving to work. 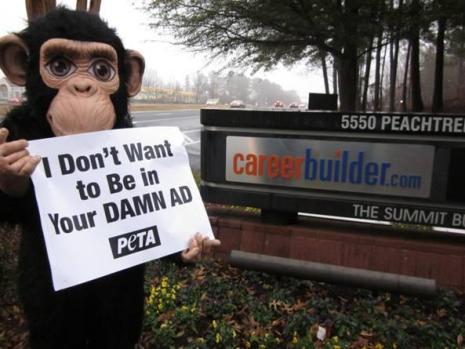 You would think that after years of hearing from thousands of PETA members about how animal “actors” are torn away from their mothers as babies, subjected to abusive training, and warehoused in cramped, filthy cages, CrueltyBuilder—er, I mean CareerBuilder—would clean up its act. Company execs even told us that they were going to “evolve” and move away from animal ads, but they’re back to their old tricks. Tell CareerBuilder to put people to work, not chimpanzees.

And by the way, CareerBuilder, if all those chimpanzees you’ve exploited someday go all Planet of the Apes on you, don’t say you weren’t warned.