There are a few old lighthouses on the East Coast being offered up free of charge to a nonprofit or other qualified entity under the Lighthouse Preservation Act of 2000. So—of course—we’re applying for them. What international animal protection organization doesn’t need a lighthouse or two, right?

The first of the lighthouses we applied for is called the Penfield Reef Lighthouse—it’s about a mile off the Connecticut coast, near the small town of Farifield. Here’s a story about it.

In all seriousness, we’re applying for the lighthouses to serve as the international headquarters of our Fish Empathy Project, where we would install interactive displays promoting the protection of fish. Plus, it would be the perfect place to house the world’s first Fish Empathy Quilt.

After we submitted our application for the Penfield Reef Lighthouse, we found out that an official with the City of Fairfield—backed by the local Historical Society—is trying to obtain the lighthouse. So we wrote to him offering to bow out of the competition (which, incidentally, is just between us and him right now) if he can ensure that no cruelty to fish (such as angling or fish sticks) takes place on lighthouse grounds. Here’s the letter we sent. I’ll be sure to let you know if we get a response, but I wouldn’t start making vacation plans to visit the PETA Lighthouse just yet . . . 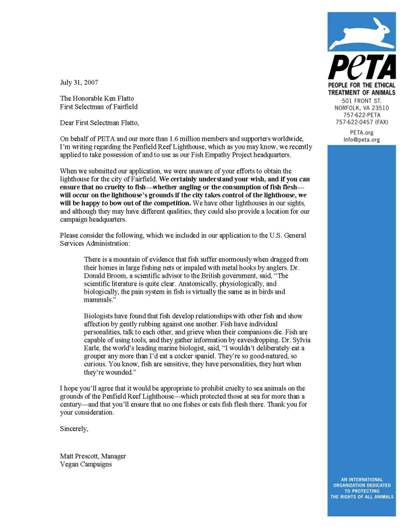