PETA’s campaign against deadly brain experiments at Johns Hopkins University (JHU) and its efforts to represent animals in court will continue despite a Washington, D.C., federal court’s dismissal yesterday of PETA’s first-of-its-kind lawsuit for “lack of standing.” The court dismissed the constitutional lawsuit, not on its merits but on technical grounds, deciding that nonhuman animals are not considered “persons” and opining that PETA and others therefore do not have “next friend” standing—a decision that PETA says appeases trade groups that benefit from the exploitation of animals but is out of touch with current knowledge of who other animals are.

“This battle, like all campaigns for civil rights over the years, will continue to be fought until our legal system recognizes that owls and other animals are sentient beings and not inanimate objects for humans to dominate and exploit,” says PETA Foundation Director of Litigation Asher Smith. “PETA will push hard until these extraordinarily cruel experiments at Johns Hopkins are stopped and animals are recognized and respected as legal ‘persons’ who have an interest in living free from harm.”

As a “next friend” to 30 barn owls being used in the JHU experiments, PETA had filed the lawsuit alleging that the law allowing taxpayer-funded tests, conducted in a laboratory at JHU, are an unconstitutional death sentence for these animals and seeking protection from harm for the birds under the federal Animal Welfare Act (AWA).

PETA’s lawsuit took aim at the 2002 Helms Amendment to the AWA, which was drafted by notorious civil rights and animal rights opponent Sen. Jesse Helms. It excludes tens of millions of birds, rats, and mice used in experiments from the same minimal protections afforded to other species under the AWA, which PETA argued violates the U.S. Constitution’s provision explicitly prohibiting congressionally imposed death sentences via the Bill of Attainder Clause.

Because of the Helms Amendment, student experimenters—whose trial and error during invasive procedures on the owls are part of the “learning process”—will operate on the birds without having to adhere to any of the protections guaranteed by the AWA. The experimenters will also cut into the skulls of barn owls, insert electrodes into their brains, force them to look at screens for hours a day, and bombard them with noises and lights. When their brains have been damaged beyond use, they’ll be killed.

The federal government wants to get PETA’s historic lawsuit to protect owls in laboratories kicked out of court. We’ve got a more than 13,000-word answer for that.

The feds filed a motion to dismiss the first-of-its-kind suit in which we argue that excluding the barn owls imprisoned at Johns Hopkins University (see details below)—along with other birds, mice, and rats born in labs—from the meager protections of the federal Animal Welfare Act is an unconstitutional death sentence.

In a brief filed today in U.S. district court in Washington, D.C., we reiterated that the 2002 Helms Amendment, which excluded these animals, is a clear case of unconstitutional congressional vindictiveness toward a particular group. The amendment was passed after infamous segregationist Sen. Jesse Helms in which he asked his colleagues if they had “ever seen a hungry python eat a mouse” and suggested that mice didn’t merit protection because in other contexts they would be killed by an exterminator.

We also knocked down the government’s argument that nonhuman animals don’t have legal rights, citing the fact that nonhuman corporations currently enjoy freedom from the exact type of constitutional harm at issue here.

Here’s the bottom line: These owls, who are slated to be tormented in useless brain-mangling experiments, deserve recognition by the court as autonomous individuals who think, feel, and merit respect for their rights.

Thirty barn owls—extremely smart, empathetic animals who use tools and care for their young—are being held captive in a Johns Hopkins University laboratory run by Shreesh Mysore. They will be tortured in invasive brain experiments and killed because of a congressionally mandated death sentence, which PETA is arguing in federal court is unconstitutional. 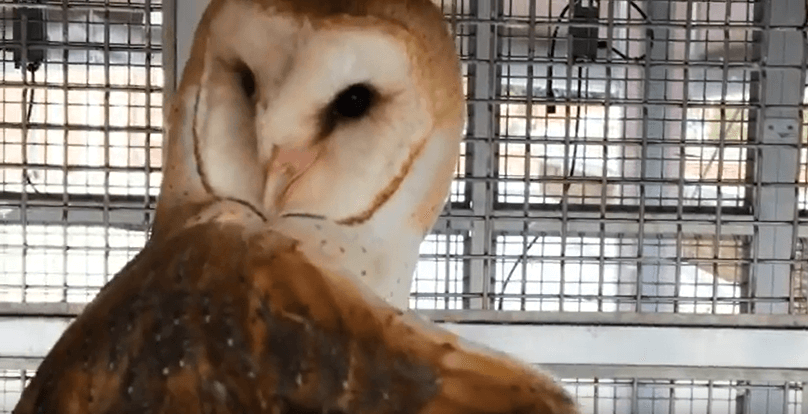 This death sentence is the 2002 Helms Amendment, which deprived birds, mice, and rats of the protections of the federal Animal Welfare Act (AWA) simply because of their species. In the U.S., these species constitute 99% of all animals used in laboratories, which means that tens of millions of animals are not protected by the AWA during cruel and deadly experiments.

In a groundbreaking case for animal rights, PETA—along with a current JHU student, a former Maryland secretary of health, and animal welfare activist and actor Evanna Lynch—is suing the federal government as “next friend” to the plaintiffs (in this case, these owls) because the Constitution is clear: Congress can’t inflict punishment on anyone in legislation. That includes inanimate corporations—so it must also include living, breathing animals.

How Can JHU Mutilate and Kill Owls Under the Constitution?

Experimenters at JHU cut open owls’ skulls and implant electrodes in their brains, lock them in restraint devices, and then bombard them with noises and lights to observe their reactions. After experimenters mutilate these birds’ brain tissue, they will ultimately kill all the plaintiffs.

Experimenters can subject owls to torment and kill them in large part because of an amendment to the AWA drafted by notorious civil rights foe Sen. Jesse Helms. The Helms Amendment excludes “birds, rats … and mice … bred for use in research, from coverage under the AWA.” That the goal of the Helms Amendment is unconstitutional punishment directed toward a particular group—in this case, birds bred for use in “research”—was reinforced by Helms himself in a cruel, sarcastic floor speech in which he implored his fellow senators to “deliver a richly deserved rebuke” to the “so-called animal rights crowd” while comparing birds, rats, and mice bred for research—a group that includes the plaintiffs—to “food for reptiles” who merit “extermination.”

This amendment stripped the secretary of agriculture of the ability to issue or enforce standards, rules, regulations, and other requirements for the humane treatment of these animals.

Why Is This a Violation of Owls’ Constitutional Rights?

The constitution is clear—Congress can’t pass any death sentences or other punishments. That means: Not against you or me, not against groups of people or political organizations, not against corporations, and not against animals.

The legislative death sentence—the “bill of attainder”—was a favorite weapon of bloodthirsty English kings. Because of this infamous history, the Constitution’s framers chose unanimously and without debate to ban all bills of attainder. So by the plain text of the Constitution, these owls have just as many protections against these laws as anyone else.

Why Should We Respect the Constitutional Rights of Owls?

According to the experimenter’s own public statement, “Animals are capable of complex behaviors and cognitive functions.” Like all animals, owls are individuals with distinct personalities. They live in communities built on complex social relationships. Owls mate for life, help each other raise their young, and, from a very young age, demonstrate a willingness to forgo food in behalf of their hungrier peers.

How can our nation protect inanimate corporations from harm but deny protection to complex, sentient beings?

What Happens if PETA Wins This Lawsuit?

The goal of this litigation is to have the Helms Amendment abolished so that the federal government can do its job under the AWA. Currently, the amendment functions as a death sentence for tens of millions of animals every single year.

A legal victory could mean that the U.S. Department of Agriculture would be ordered to issue rules that require the humane treatment of birds used in laboratories and conduct rigorous inspections to ensure adherence to those standards. Experiments such as these—and many others involving birds, mice, and rats—that treat animals’ lives and interests as disposable cannot satisfy any rigorous definition of humane treatment.

PETA has engaged in years of painstaking efforts to rescue these owls because they’re used in some of the most gruesome, worthless experiments inflicted on animals today.

Owl vision and hearing are not even remotely comparable to those of humans. Owls use different parts of their brains from humans to process stimuli. The stress of experimental torture further interferes with their brain processes.

These experiments aren’t about helping humans—they’re about keeping taxpayer-funded grant money flowing into the university.

Join hundreds of thousands of supporters in urging Johns Hopkins to stop these cruel and useless experiments on owls on its campus, release the animals to a reputable sanctuary, and embrace modern, animal-free research methods that offer human patients real hope for cures and treatments.

Help PETA Save These Owls Now!