Beachgoers at Puri Beach in Orissa, India, were greeted by a little more than just sun and surf yesterday. PETA India recognized World Environmental Day with a giant sand sculpture of a polar bear crushed beneath a larger-than-life shoe and a sign that read, “Your carbon footprints have leather shoes.” You can catch the full story here. 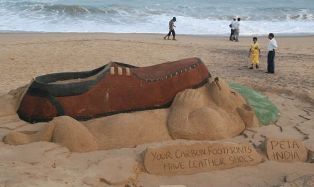 The 10-foot-tall sand sculpture coincided with PETA India’s new environmental campaign, highlighting the harmful effects that the leather industry has on the environment. And given that India is one of the top producers of leather, the sculpture is perfectly fitting, I’d say.

Leather products full of chemicals, dyes, oils, and finishes cause irreversible devastation not only to the world’s waterways and ecosystems but also to human health. And the cruelty involved with the leather industry isn’t any better—since leather is the most important coproduct of the meat industry, leather production directly contributes to factory farms and slaughterhouses. And according to a 2006 United Nations report, raising animals for food creates more greenhouse gasses than all trucks, cars, planes, and ships in the world combined. The damage caused by India’s leather industry makes the country a major contributor to global warming and the further endangerment of polar bears and their natural habitat.

I think PETA India’s N.G. Jayasimha puts it best when he says, “Consumers can save polar bears and cows at the same time by giving leather products the boot.” And well, we tend to agree.