PETA has filed a motion for leave of court with the Court of Appeal for Ontario seeking to overturn the dismissal of our free-speech case against the city of Toronto and Astral Media Outdoor—which, at the request of Canada Goose’s ad agency, removed PETA ads calling for a boycott of Canada Goose.

Astral Media Outdoor placated the outerwear company at the expense of animals in need.

In its dismissal, the Ontario Divisional Court ruled that it does not have jurisdiction to hear our application for judicial review, calling it a contract dispute.

The crux of the case—PETA’s allegation that access to public space controlled by the city shouldn’t be controlled by corporate interests like Astral Media and Canada Goose—has not been examined. We believe the ruling was incorrect.

We want our day in court to advocate for the coyotes caught in steel traps and the geese whose throats are slit before their feathers are used in Canada Goose’s coats.

Read more about this ongoing case below.

Today, coyotes, who are caught in painful steel traps, and geese, who are violently slaughtered before their feathers are stuffed into jackets, got their day in court. PETA presented to the Ontario Divisional Court our case regarding Astral Media and the city of Toronto’s removal of PETA ads from city bus stops within a day of their placement, which we believe to be an unlawful violation of our rights. The court has heard our case, has elected to spend some time reviewing all the evidence, and will soon render its verdict.

Astral Media Outdoor placed our ads, which encourage shoppers to boycott Canada Goose over its use of fur and down from slaughtered animals, on several bus stops in Toronto. Even though four Astral directors reviewed the ads before they were placed and found no violations of the advertising code standards, they were taken down within a day of being posted. Astral brazenly lied to PETA, telling us that it had received “numerous complaints” about our ads to justify their removal.

But Astral received exactly one e-mail about the ads—from a Canada Goose representative. Documents revealed that during the conversation, the advertising agency that represents Canada Goose told an Astral Media agent:

“I know this is difficult on your end, but CG has spent quite a bit of money with Astral over the past year or so—so it was incredibly disappointing that you guys would take this type of advertising without giving us a heads up …. Is there anything that can be done here? Please let me know when these are scheduled to come down.”

The Canada Goose representative implied that Astral would be risking the loss of the company’s business if the agency didn’t pull PETA’s ads, which it did immediately.

It’s an egregious violation of PETA’s rights to censor our message that geese and coyotes are individuals who don’t deserve to be violently killed for the fur and feathers used in Canada Goose’s jackets. We will continue working to see Astral and the city of Toronto restore our ads so that we can get our message out to consumers.

The following was originally published on March 14, 2019:

Today, PETA submitted an application for judicial review to the Ontario Divisional Court demanding that the city of Toronto and Astral Media Outdoor replace ads that were unlawfully taken down in September 2018. The application alleges that the city violated PETA’s Charter right to free expression by removing PETA’s ads, which call for a boycott of Canada Goose and point out that geese and coyotes suffer for the company’s coats.

Astral Media Outdoor initially posted PETA’s ads on bus shelters owned by the city of Toronto. The ads showing a coyote proclaiming, “I’m a Living Being, Not a Piece of Fur Trim,” and a goose stating, “I’m a Living Being, Not Jacket Filling,” above the words “Boycott Canada Goose” were placed at several locations between Canada Goose’s headquarters and the home of the company’s CEO, Dani Reiss. But the ad agency took down the ads within a day of posting them.

These are the ads that the agency removed: 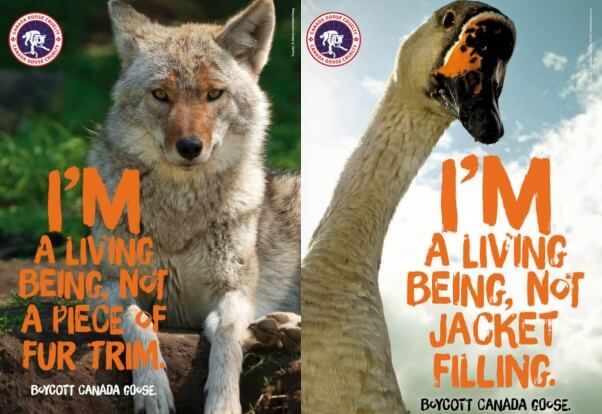 “Censoring PETA’s message that geese and coyotes are tormented and violently killed for Canada Goose jackets is an egregious violation of the Canadian Charter of Rights and Freedoms. PETA’s lawsuit seeks the restoration of our ads.” —PETA President Ingrid Newkirk

Geese used for down are typically shoved into crates and shipped in all weather extremes to slaughterhouses, where they’re stunned, their throats are cut, and their bodies are dunked into scalding-hot defeathering tanks.

Coyotes used for Canada Goose’s fur trim can suffer in painful steel traps for days before they’re shot or bludgeoned to death. Trapped coyote mothers desperate to get back to their starving pups have even tried to chew through their own limbs to escape.

A wide variety of top brands—including HoodLamb, NOIZE, Save the Duck, For All Kind, and Wuxly Movement—sell warm, stylish, vegan coats that no animal had to suffer and die for.

Taking down PETA’s ads will not silence us. Let Canada Goose hear you loud and clear—join us in urging the company to drop fur and down now.