It’s that time of year again when the leaves change colors, the air is crisp, and all we seem to want are and wool-free sweaters. Lean into the season by cozying up with your favorite blanket and the latest edition of PETA Global, PETA’s online magazine! 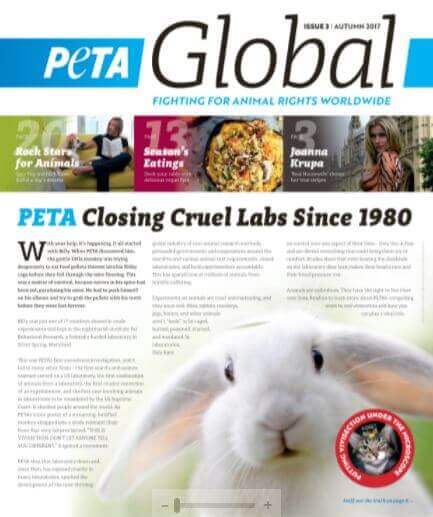 PETA has been working to end experiments on animals since our very beginning. Whether it’s going up against academic institutions, the military, or the government, PETA doesn’t back down when animals are suffering. In this issue, learn about PETA’s recent investigations of the University of Pittsburgh—which tortures, maims, and kills animals with taxpayers’ money—and other facilities at which cruelty would have remained hidden behind laboratory doors if not for PETA exposés.

With Thanksgiving just around the corner, read up on PETA’s holiday project in which we teamed up with police officers in Texas to give away Tofurky roasts, vegan dishes to cook this fall, and ways to stay warm without harming animals. Find activist inspiration from PETA Global‘s exclusive interview with Oscar-nominated actor and fierce animal rights advocate James Cromwell, who has stood up to universities that test on animals, SeaWorld, and other animal abusers. 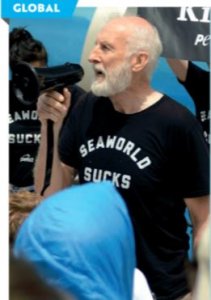 PETA Global‘s latest online issue is interactive information at its best. With articles on everything from giving the cosmetics industry an animal-friendly makeover to Iggy Pop’s animated PETA video—set to Nick Cave’s music—in which he prevents cruelty to animals, you’re sure to be encouraged and entertained. Don’t forget to check out PETA’s catalogue for Christmas gift ideas and to turn on your device’s sound so that you can hear the magazine pages turning and watch videos.

Make your commitment to the animal rights movement official by becoming a PETA member today!