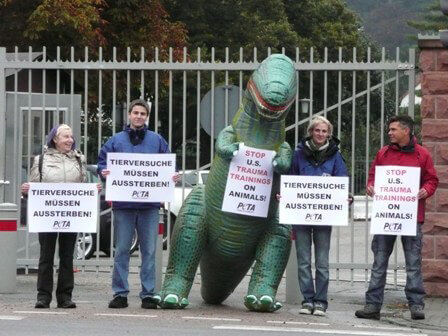 Joined by a prehistoric pal (who apparently speaks English), members of PETA Germany gathered outside a U.S. Army facility in Heidelberg to protest the Army’s proposed plans to torment and kill animals in cruel and archaic trauma training exercises in Oberpfalz, Bavaria.

This marks the third time since May that the U.S. Army and private contractors have applied for permits to cut up and kill animals for trauma training in Germany. The first application was withdrawn because of overwhelming public opposition to the project. A subsequent application was denied because officials determined that the animal laboratories would violate Germany’s animal protection law, which requires the use of non-animal methods when they are available—and there are PLENTY available! The German Armed Forces has written to PETA, stating, “[T]he armed forces do no animal tests for training purposes. For training exercises the soldiers learn with really good models and the doctors don’t need animal experiments.”

You can help make sure that US legislation that has been introduced to gradually replace the horrific use of animals in military training with modern, sophisticated non-animal methods, such as high-tech human patient simulators gets passed into law by writing to your Congressional representative. Politely point out that such exercises—in which pigs and goats are stabbed, mutilated, and killed—are incredibly cruel, inferior to modern alternatives, and should be replaced with medical training methods that save animals and better prepare soldiers to treat casualties on the battlefield..