Pigs who can barely walk, who suffer from eye infections and bloody tails, and who are covered with feces and crammed together on concrete floors. A refrigerator full of pigs who have died. PETA Germany has obtained footage documenting these horrors and more on pig farms owned by three members of the German Parliament, and the story has been published by Der Spiegel (Germany’s equivalent of Time or Newsweek). 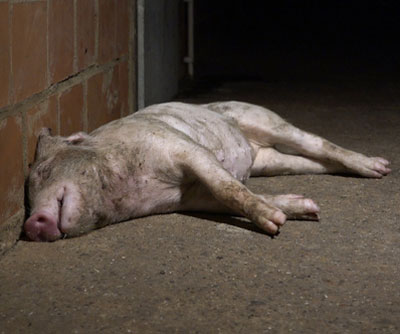 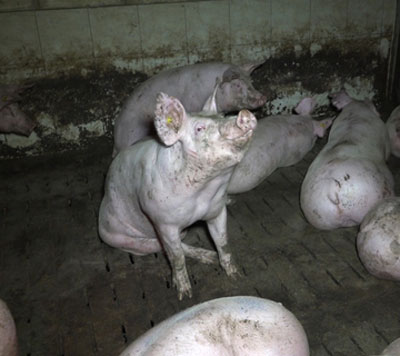 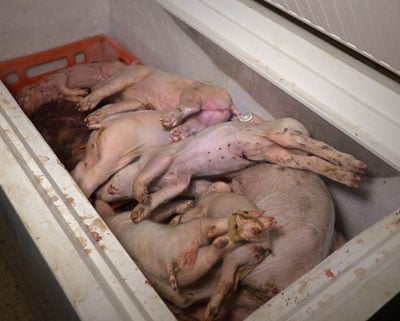 All three members of Parliament (MPs) are also members of the Committee for Food and Agriculture, which plays an advisory role on legislative projects concerning animal agriculture and also has the right to propose new agricultural bills in Parliament. As these men are working on laws that will affect themselves, this poses a major conflict of interest. In effect, the “foxes” are guarding the pig farm.

Not surprisingly, these MPs have a reputation for opposing any new mandatory laws or regulations affecting farms, instead advocating “voluntary” improvements. One of the MPs is the founder of a label called Tierwohl (“animal welfare”), which is supported by many meat companies and is supposed to indicate that the animals are treated humanely. Such labels are meaningless and fool conscientious consumers into supporting the very abuses that they seek to avoid.

Routine, systemic cruelty to farmed animals has been exposed numerous times by PETA Germany and other German animal rights organizations. And although the meat industry tries to silence them by filing lawsuits, German courts have repeatedly sided with the animals and recognized the right of the public to know what goes on behind the closed doors of factory farms.

PETA Germany is pushing for criminal charges against all three MPs because of numerous breaches of Germany’s Animal Protection Act and is also calling for better legal protection for animals on factory farms.

Here in the U.S., the meat industry is also fighting to keep people from finding out what goes on inside those huge windowless sheds by attempting to pass “ag-gag” laws that make it illegal for animal defenders to document cruelty. Click here to find out how you can fight back.