Today, PETA called on the San Diego sheriff and district attorney to launch an investigation into the deaths of as many as 13 Thoroughbred horses in just the first few weeks of the Del Mar racetrack’s summer meet. Since July 19, 10 Thoroughbreds broke bones and were destroyed, and three horses died or were euthanized the week before the meet opened. Additionally, the fates of two horses—Sinfully and Divine Tale, who were injured on the track on August 27 and 30—are unknown. PETA believes that all the horses may have had undisclosed injuries that were masked by medications commonly administered to keep lame and unfit horses competing—and that racing injured horses may violate state anti-cruelty laws. 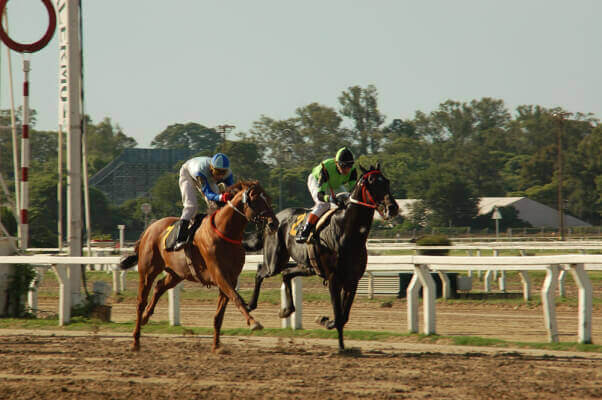 According to Dr. Rick Arthur, equine medical director for the California Horse Racing Board (CHRB), “90% of all horses suffering fatal musculoskeletal injuries racing or training have pre-existing pathology—a prior injury—at the site of their fatal injury.” Last year, following PETA’s call for the release of veterinary records for the 16 horses who died in the 2014 summer meet at Del Mar, CHRB Executive Director Rick Baedeker also confirmed to PETA by letter that necropsies showed that several of the horses had pre-existing injuries unknown to betters or authorities.

“If trainers know that horses are sore or injured, they should not be giving them painkillers, anti-inflammatory drugs, or sedatives to keep them running when they should be recuperating,” says Senior Vice President Kathy Guillermo. “If horses need those medications for therapeutic reasons, it’s dangerous and, we believe, illegal to put them on a track.”

Despite outcry from members of Congress and many racing insiders, a number of medications are allowed in the week before a race, and most horses are injected with the powerful anti-inflammatory phenylbutazone 24 hours before racing—supposedly to prevent swelling, but the drug also masks pain. Additionally, traces of some painkillers and sedatives, such as acepromazine and lidocaine, are still allowed in the horses’ systems on race days in California. For this reason, it’s likely that injuries that can turn life-threatening on the track are missed during pre-race examinations because the horse is not feeling or showing the pain of an injury and the track veterinarian doesn’t examine trainers’ records.

To help us protect horses, please urge your senators and representatives to support strong legislation to clean up racing.