Update: And we’ve got pics! Lemme know which design you like best for the suggested memorial.

After 122 years in business, the world’s largest stockyard closed down last month, holding their very last livestock auction in front of a nostalgic crowd on April 11. After we had finished celebrating here in the office, we decided that, much as one might like to forget them, the actions of South St. Paul Stockyards—where around 300 million cows have been poked, prodded, kicked, and dragged to their deaths in the last century—need to be commemorated. Today, we sent a letter to Greg Miller—president of Interstate Partners, the company that plans to redevelop the stockyard property—urging him to erect a memorial to the animals who passed through the stockyard’s gates. As PETA President Ingrid Newkirk puts it:

“Millions of cows were bought and sold at South St. Paul Stockyards with no more regard for their feelings than if they were made of tin. At the very least, they deserve a stone or plinth that helps people remember the suffering the animals endured on their way to people’s dinner tables.”

You can read PETA’s letter to Greg Miller here. I’ll let you know if we get a response. 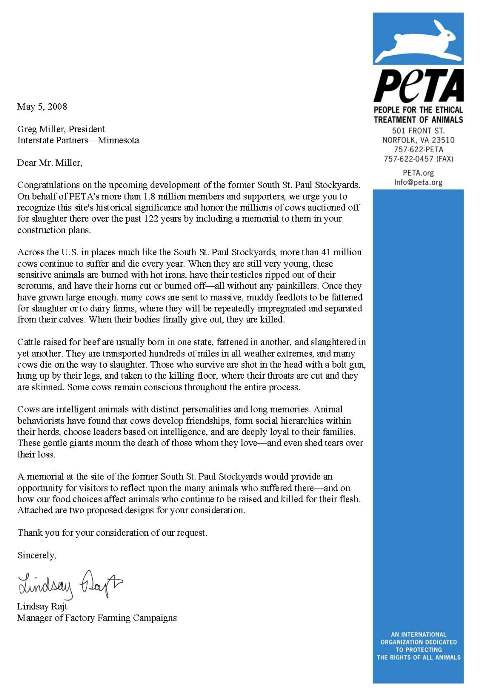