There’s been a lot of talk about the arrest of 75 San Diego State University students in a drug sting recently, and now that the dust has settled a little bit, we figured it was a good time to let students at the university know why eating meat is far worse for you than smoking pot. We just placed an ad in the school newspaper The Daily Aztec, which shows a close-up of a cow’s face next to the tagline “Say No to Pot Roast. Don’t Be a Meathead. Kick the Habit!” The ad points out that, while there’s no doubt that getting high can hurt your test scores, people who want to stay away from drugs should stay away from meat, which is often loaded with pesticide residues, hormones, and antibiotics. Meat, egg, and dairy-product consumption have also been linked to heart disease, stroke, obesity, diabetes, and cancer. As PETA President Ingrid Newkirk puts it,

“Students probably are putting more drugs into their systems by eating the burgers and chicken salad in the school cafeteria than from anything they smoke. Chickens, pigs, and cows raised on today’s factory farms are fed growth-promoting drugs by the bucketful, and that’s passed on to consumers by mouth.”

So there you have it, kids. Say “no” to pot roast. 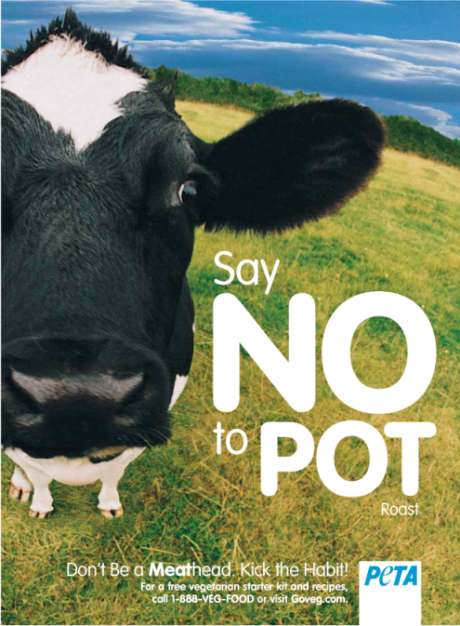