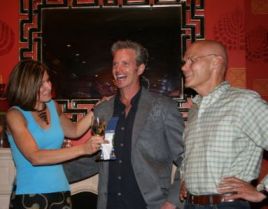 Just a few more little tidbits for you from the recent party that the influential political odd couple Mary Matalin and James Carville hosted for the launch of PETA VP Dan Mathews’ new book.

Evidently, Mary—who is certainly no stranger to hosting big events—has never in her life received so many calls about what to wear to a party. I absolutely love the idea that all those Capitol Hill bigwigs were calling up anxiously the day before to find out where they could buy vegan shoes. Mary herself ended up going barefoot, just to be on the safe side, and as for James, well, James opted for hemp—announcing to the assembled partygoers, “I’m all hemped out like Woody Harrelson!”

Dan gave a speech about the history of animal welfare legislation in this country, which has been consistently bipartisan, with strong advances for animals coming from staunch conservatives just as often as card-carrying liberals, and to drive home the point, Mary observed that it was incredibly rare that she and James could host a party together—normally when she throws a bash for her republican pals, James hightails it out of there to take the kids to a movie, and vice versa (I bet those kids get to see a lot of movies).

Mary also pointed out something else that she and Dan Mathews have in common—they’ve both had the experience of having bologna thrown at them in Iowa. For the full context of that joke, you should check out Dan’s book. If it can reconcile a crowd of hardcore democrats and republicans in Washington, you can bet it’s well worth the cover price.

Click here for the full text of Dan’s speech.