PETCO pledged in 2005 that it would end the sale of large birds in its stores. Last month, a concerned PETCO customer noticed that a PETCO store in his area had a white-capped pionus, a kind of parrot, for sale. The bird had apparently spent 14 months in a cage at the store, waiting for someone to buy her. PETCO’s price tag for the bird was $799, but for some time, there was a “Manager’s Special—50% Off” sign on the cage she was in, as if this sensitive bird were an out-of-style shirt to be placed on the clearance rack. 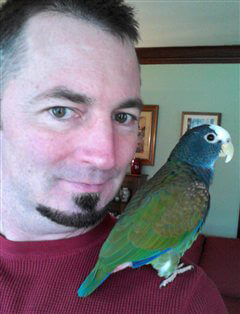 PETA reached out to its contact at PETCO’s corporate office and got the complainant in touch with the pet trade giant. For once, PETCO did the right thing and allowed the person who contacted PETA to adopt the bird, since named Tegan, for a donation to the PETCO Foundation, which provides funds for animal welfare organizations and spay-and-neuter efforts, among other things.

Tegan now has the run (fly?) of the house and the company of other birds. The kind man who took her in says that Tegan is a very affectionate bird who enjoys taking showers and who spends at least 4 to 5 hours a day riding around on his shoulder, where she seems happiest. You can find tips on caring for birds on our companion animals webpage.

Two important lessons emerge from this case. One: Never hesitate to speak up when you suspect an animal needs help. And the other? Don’t support the pet trade—shop only at pet-supply stores that don’t sell live animals.