Man, so this year’s Oscar race for Best Actor is going to be a good one, and all of us at PETA are extra excited since two of the nominees have been active in our campaigns.

First off, we’ve got Ryan Gosling, who is nominated for his role as Dan Dunne in Half Nelson. Ryan helped us out with our KFC campaign by penning a letter urging the company to implement basic animal-welfare standards.

But I think the smart money is on Forest Whitaker for his portrayal of Ugandan dictator Idi Amin in The Last King of Scotland. The experience gained while shooting this pro-vegetarian PSA may just give him the edge he needs.

While writing this entry, I started thinking about some past Oscar winners who have helped PETA with our work over the years, and the ones I came up with were:

Charlize Theron, who got her statue in 2003 for her leading role in Monster. Charlize has helped PETA in numerous ways over the years, most notably by narrating a puppy mill exposé and posing for this beautiful anti-fur ad. 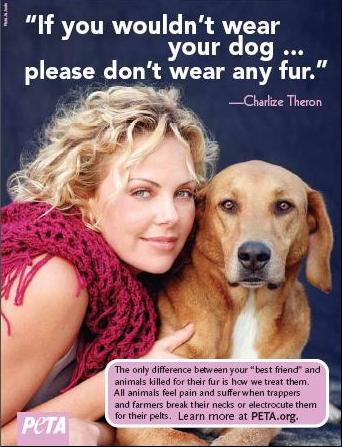 Dame Judi Dench, who won in 1998 for her role in Shakespeare in Love (one of my favorite movies, btw—Tom Stoppard is my personal hero). Dame Judi has also helped on many campaigns over the years, including gracing the cover of our guide to cruelty-free charities.

And last but not least is Jack Lemmon, who won in 1955 for his role in Mister Rogers and in 1973 for Save the Tiger. Jack was against animal testing and before his death in 2001, he wrote to Congress on PETA’s behalf to protest cruel cigarette smoking experiments on animals.

I know I just said “last but not least” but my celeb-obsessed cubicle-pod-mate Stephanie just told me that four of the last eight winners for best picture starred PETA pals as well. Judi Dench in Shakespeare in Love, Sexiest Vegetarian nominee Thora Birch in American Beauty, long-time PETA supporter Joaquin Phoenix in Gladiator and Dominic Monaghan in Lord of the Rings.