Today has been kind of massive as far as animals are concerned. In addition to winning the POM Campaign, we just got news that Smithfield Foods (the largest pork processor in the world) will begin phasing out the use of gestation crates in all of its farms. Gestation crates are among the most hideous torture devices employed by the meat industry, and while we’d love to see them banned, like, yesterday, this commitment on Smithfield’s part is still a great step forward on an issue that we’ve put years of hard work into—pushing McDonald’s, Safeway, Albertson’s, WalMart, and others to oppose gestation crates, and speaking at Smithfield’s annual meeting to raise awareness among shareholders. The Wall Street Journal covered the story today, and MSNBC ran a great piece as well, with an accompanying photograph that says more than I ever could about exactly why so many animal advocates have dedicated their lives to getting this practice outlawed: 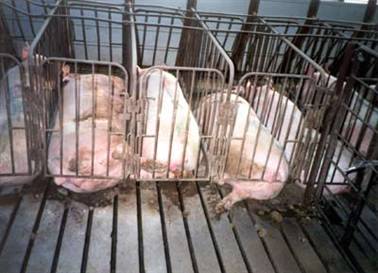