I think that even the most die-hard Star Wars convention attendees will agree with me on this: The au natural pose struck by smokin’ hot actor and host of G4’s Attack of the Show! Olivia Munn in PETA’s newest anti-circus ad rivals her infamous Princess Leia photo in sex appeal. Elephants belong in their natural environment, not in the circus, so check out these photos of Olivia as she unveils her stripped-down billboard in L.A. and try to disagree with me that natural is the way to be. 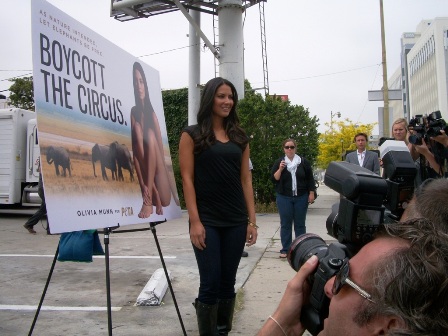 If you live in Southern California, check out the billboard at the corner of Wilshire Boulevard and Highland Avenue.

Olivia, who rightfully calls the abuse of animals in the circus “sickening,” was brought to tears watching video footage of elephants who were hit with metal-tipped bullhooks at the Ringling Bros. Circus.

If everyone who goes to see Olivia in her upcoming film—a modest production called Iron Man 2—joins her in boycotting the circus, we’ll be one step closer to stopping the suffering for good.