Eight Belles did it for New York Times sports columnist William C. Rhoden. After watching the filly break both front legs just after crossing the finish line in the 2008 Kentucky Derby, Rhoden never covered another horse race. “From Eight Belles to Barbaro to thousands of horses in between, racing is a brutal game that grinds up young horses,” he wrote in a recent column. “This unrepentant industry exists solely for the pleasure of gamblers and gambling.” 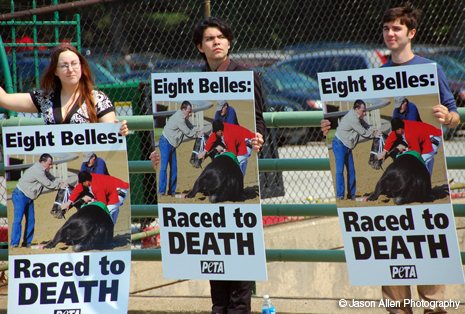 Rhoden also joined PETA in condemning the racing industry’s abandonment of burned-out, used-up thoroughbreds and backed PETA’s proposed Thoroughbred 360 Lifecycle Retirement Plan, which would require that thoroughbred owners and breeders pay a $360 retirement fee for every foal registration, ownership transfer, and breeding registration. Rhoden calls the Jockey Club’s refusal to take action in response to PETA’s proposal “hardly … acceptable in an industry in which an estimated 10,000 horses from the United States end up slaughtered for meat every year ….”

You can help prod the Jockey Club to do right by the animals it uses by sending an e-mail asking that it adopt PETA’s retirement plan.