After years of pressure by PETA, the National Institutes of Health (NIH) has finally begun to listen, announcing that it will prioritize human-relevant sepsis research (a life-threatening reaction to severe infection) instead of continuing to focus on deadly and flawed experiments on mice and rats.

The National Institute of General Medical Sciences (NIGMS), part of NIH, announced that it will be allotting more taxpayer money to advanced, animal-free test methods to find treatments and cures for this painful condition, which kills thousands each year, and that flawed experiments on mice will be considered “low priority.”

PETA is celebrating this long-awaited breakthrough—but we’re not shying away from the work ahead. We’ve prepared a comprehensive scientific and legal report outlining exactly why sepsis experiments on animals are potentially unlawful as well as scientifically unsound. We’ve sent the report to NIH Director Francis Collins, and we may consider legal action if the agency continues to fund sepsis experiments on animals, which he has admitted don’t work.

In its announcement, NIGMS noted:

“Despite decades of intensive study, sepsis remains a poorly understood condition with limited diagnostic tools and few specific treatments. . . . NIGMS seeks to support sepsis research that uses new and emerging approaches, such as clinical informatics, computational analyses, and predictive modeling in patients, and new applications of high-resolution and high-throughput bioanalytical techniques to materials obtained from septic patients. Observational studies of septic patients that are designed to provide new knowledge of the biological mechanisms that are associated with the clinical heterogeneity of disease and resolution processes are strongly encouraged. . . . NIGMS considers the following areas to be of low priority: Studies using rodent models of sepsis …”

The decision follows years of efforts by PETA, including our giant “mouse” protesting NIH-funded sepsis experiments: 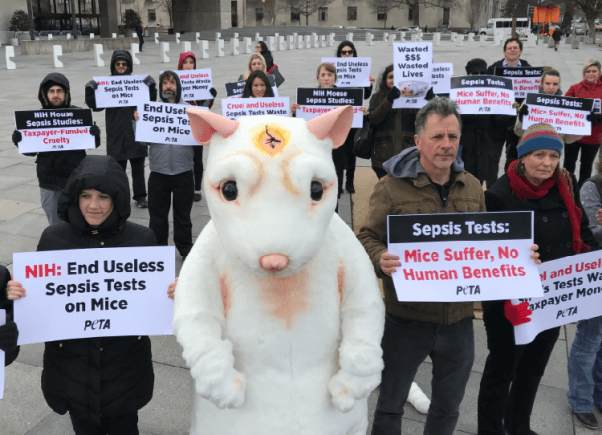 A landmark study published in the journal Proceedings of the National Academy of Sciences concluded that the results of sepsis experiments on mice can’t be applied to humans because the genetic responses of mice to sepsis were “close to random in matching their human counterparts.” The study took a decade to complete, involved dozens of researchers, and was so noteworthy that Collins wrote an article about it, lamenting that “150 drugs that successfully treated this condition in mice later failed in human clinical trials—a heartbreaking loss of decades of research and billions of dollars.” He added, “No wonder drugs designed for the mice failed in humans: they were, in fact, treating different conditions!”

Yet NIH currently gives out over $100 million in funds for sepsis experiments on animals, including tests in which mice and other animals are injected with toxins or feces, cut open in invasive surgeries, stitched together with other animals, force-fed harmful bacteria, and/or made to inhale a bacterial slurry.

Animals are still enduring suffering for experiments that tell us nothing.

Let’s help put an end to this cruelty. Join us in calling on NIH to stop funding all worthless sepsis tests on animals today: