At Leidy’s, Inc., in Souderton, Pennsylvania, pigs are slaughtered for Whole Foods—and it’s also where the U.S. Department of Agriculture’s Food Safety and Inspection Service (FSIS) documented that disabled pigs were unable to move as little as 3 feet to get a drink of water as well as violations of 24 more federal meat-inspection regulations in approximately 16 months. 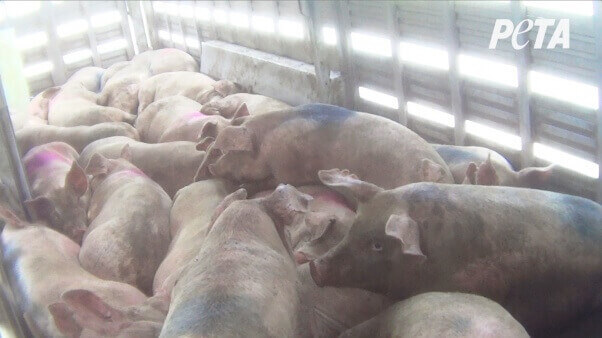 More than 20 pigs were tightly packed into a metal trailer on a hot day more than 24 hours before they were hauled to slaughter.

PETA obtained the FSIS documents in the wake of a PETA eyewitness investigation revealing crowding, lameness, rectal prolapses, and a lack of prompt veterinary care at Sweet Stem Farm, LLC, which sends pigs to Leidy’s for slaughter and supplies Whole Foods with supposedly “humane” pork. FSIS inspectors found that the floor was covered with a heavy buildup of blood, meat, and scraps of fat and that green fecal matter was smeared on a hog carcass. A pink mold-like growth was found on every floor-to-ceiling beam in the carcass cooler, and a table used to handle pig flesh tested positive for listeria, bacteria that can cause serious infections, diarrhea, and even death.

PETA also obtained FSIS records for a slaughterhouse in Hegins, Pennsylvania, where Sweet Stem Farm sent other pigs. Inspectors found barrels of bones, skulls, and fat and too many flies to count. This slaughterhouse was also cited for ineffectively stunning a cow—a serious problem that it failed to respond to FSIS about for weeks.