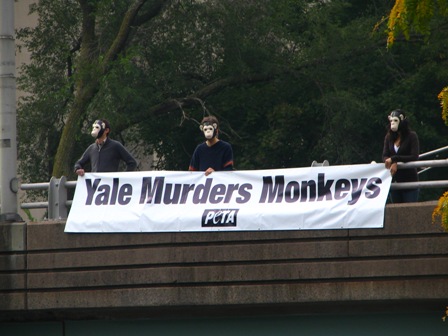 As motorists passed underneath the banner-wielding monkeys, they were reminded that “Yale Murders Monkeys.” Well, specifically, Yale imprisons monkeys in tiny cages, mutilates them, injects them with poison, forces drug addiction on them, and eventually kills the animals as part of the experiments—but “murders” pretty much covers it, don’t you think?

That’s right—the more than 160 primates who are locked up in Yale’s laboratories are the subjects of many cruel experiments, several of them drug-related. Some of the more heinous abuses include injecting toxins into monkeys’ brains so that they can’t walk, move or eat, addicting the monkeys to PCP to induce schizophrenia (excuse me?) and addicting them to nicotine by giving them the equivalent of smoking 17 packs of cigarettes per day. Because, ya know, exposing a monkey to 17 packs’ worth is really reflective of an average human smoker’s habits. Right.

The vivisectors at Yale are even killing pregnant monkeys and removing their fetuses in order to cut out their brains. If this were happening anywhere else, it would be condemned as psychopathic, murderous behavior—but because it’s done in the name of “science,” we’re expected to accept this.

Well, forgive me, but this isn’t the kind of thing that we at PETA tend to accept—and neither, I think, would most reasonable people. These monkeys are being tortured and murdered at taxpayer expense, but who said the taxpayers approve?

If you don’t approve, please write the National Institutes of Health and ask them to end their policy of funding animal experiments like these.