Update: Please click here to take action on this issue. 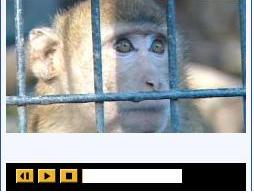 I wish I could say that the title of this entry were anything other than a simple statement of fact. But according to shocking allegations made by a former animal technician at Shin Nippon Biomedical Laboratories (SNBL), the recent boiling of a live female macaque monkey—who was evidently placed inside a giant rack washer inside her wire cage and killed during the 180 degree, 20-minute cycle—was just one in a long list of egregious animal welfare violations at the animal-testing facility.

The whistleblower, whose employment was terminated shortly after she complained about these apparent violations, told reporters that SNBL’s reaction to her inquiry about the incident with the macaque was to complain about the additional paperwork that it was generating.

“When I inquired about it,” she told a Kiro TV reporter who investigated her allegations, “the reply I got back was ‘Oh, dear.’ Think of the paperwork. That just upset me to my soul because no animal in there should die because of somebody’s mistake or negligence or lack of compassion. ”

Last week, PETA sent the whistleblower a $1,000 check and a basket of groceries to thank her for standing up for the animals abused in this lab despite the fact that her decision to do so likely led to her firing. As PETA President Ingrid Newkirk puts it, “Her ‘reward’ for revealing SNBL’s callous and vicious treatment of monkeys was unemployment. But in our book and that of all primates, she’s a hero.”

The USDA is currently investigating this incident, so there’s a chance that the lab will be held accountable for this horrific negligence, but there isn’t much hope that those responsible will be charged with cruelty to animals. As the Seattle television station which has been covering this story pointed out, although causing unnecessary suffering or death to an animal is illegal in the state, there’s an exemption for this on the books in cases where the cruelty is connected with “any properly conducted scientific experiments.”

As horrific as this story is, it would never even have come to light in the first place had it not been for the whistleblower’s willingness to speak out, and we are extremely grateful to her for her bravery. You can watch investigative footage of this lab here, and for more information about what you can do to help animals suffering in laboratories, click here.