Victory: As a result of PETA’s campaign, the Army announced that it is ending its cruel use of monkeys in chemical attack training exercises and will instead use advanced human simulators!

As the U.S. Army is poised to begin poisoning African vervet monkeys at Maryland’s Aberdeen Proving Ground, PETA’s “monkeys” descended on Secretary of the Army John McHugh’s home to demand that he stop the cruelty. 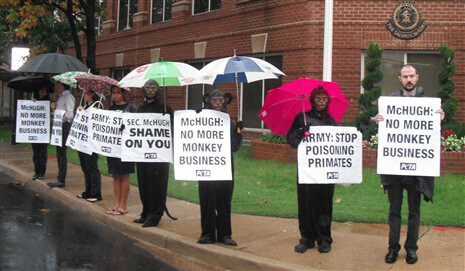 If McHugh was a little uncomfortable that we were on his front doorstep, perhaps he should think about how uncomfortable the Army makes its primate prisoners, injecting the monkeys with a drug overdose in a crude and cruel attempt to replicate the effects of a nerve agent attack. The drug overdose causes the monkeys to suffer from violent seizures and vomiting, and some even stop breathing. The monkeys are subjected to this abuse every few months for as long as three years.

Military and civilian training programs around the world use sophisticated human patient simulators that can be programmed to mimic the human response to a nerve agent attack, which is very different from a monkey’s. Not only are the Army’s monkey experiments cruel and inefficient, they also violate Department of Defense policies prohibiting the harming of primates in training exercises and requiring that non-animal methods be used whenever they are available.

We brought the message home today for McHugh. Now you can help stop the U.S. Army from poisoning monkeys by calling Maj. Gen. Nick Justice, commanding general of Aberdeen Proving Ground, at 410-278-0833 and urging his facility to switch to non-animal training methods.