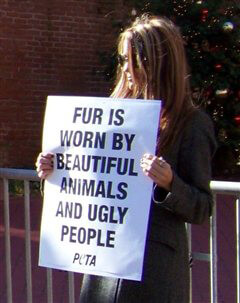 Some residents of Carlie Colella’s home state aren’t happy with her for making Maryland look like Hairyland by wearing the fur coat she was given as a prize for winning the Miss Maryland pageant. As Colella arrived at the Maryland Theatre in Hagerstown on Sunday for a send-off reception before heading to the Miss America pageant, she was greeted by PETA supporters who were there to remind her that only mean people wear fur.

Perhaps having seen video footage of animals being beaten and skinned alive on the body television that one of the protesters wore, Miss Maryland will prove that she is a beautiful person inside as well as out by donating her fur coat to PETA.

That would, in fact, be a great way to start bringing about world peace.