Update: Last month, Georgia Animal Rights and Protection (GARP) made an alarming discovery, one that serves as another unnecessary reminder of the widespread neglect, suffering, and death in the pet trade industry: Hundreds of dead tropical fish and crabs were bagged up and tossed out like garbage, apparently by Sun Pet Ltd., a PetSmart and Petco supplier based in Atlanta. 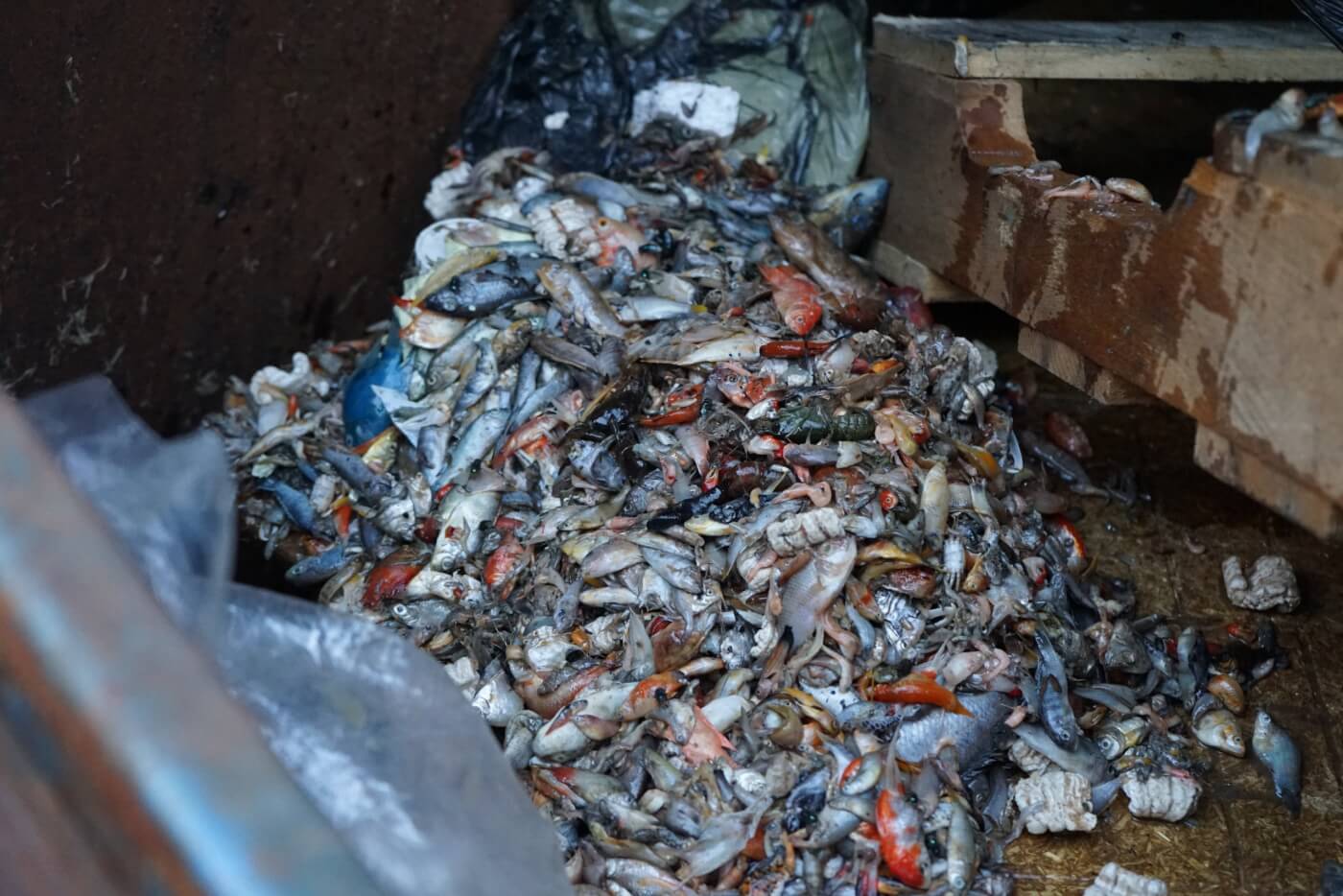 GARP rescued one live fiddler crab half buried in the heaps of dead ones. Clearly, Sun Pet treats these animals as inventory instead of as the individuals they are. Some fish, for example, enjoy physical contact with other fish and often gently rub against one another—in the same way a cat may weave in and out of your legs. And some fiddler crabs can be neighborly: If a male Australian fiddler crab’s burrow is being invaded by an intruder looking to take over, his male neighbor will leave his own burrow to help fight off the intruder. But animal suppliers like Sun Pet and the pet stores that keep this hellhole in business see the animals they exploit as nothing more than dollar signs. 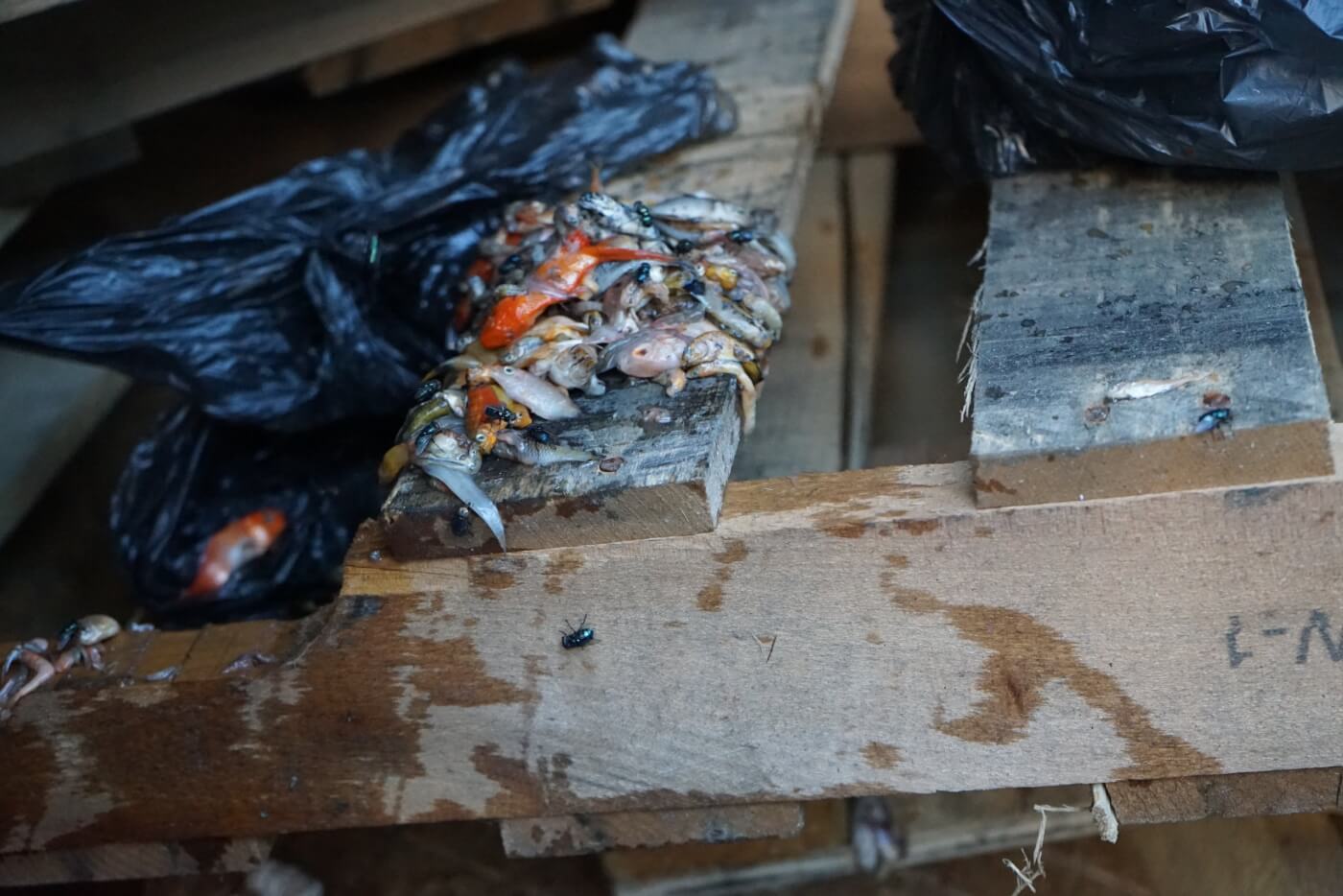 These dead, discarded fish represent just a fraction of the more than 1 million fish Georgia Department of Agriculture inspectors found at Sun Pet in August 2021. Keep reading to discover the horrors that the U.S. Department of Agriculture discovered at Sun Pet during a July 2021 inspection and to find out how you can take action for fish and other animals exploited in the pet trade.

Dead hamsters’ partially eaten bodies were found in nearly two dozen enclosures—and one hamster was being eaten alive by other severely stressed hamsters. Unnoticed “pieces of deceased hamster” were scattered throughout animals’ food and bedding. Gerbils were unable to reach water. Boxes confining hamsters were stacked precariously, “swaying … in the breeze.” This is what U.S. Department of Agriculture (USDA) veterinarians found during a routine July inspection of Sun Pet Ltd., a PetSmart and Petco supplier.

This is the same supplier that was the subject of a previous PETA undercover investigation revealing widespread suffering—live hamsters were even bashed against a table by a worker.

The recent USDA report details systemic neglect affecting hundreds—if not far more—of the nearly 13,000 animals onsite at the Atlanta-based animal supplier. Spilled food had “green fuzz” on it. Gerbils who had been denied access to water drank “voraciously” when finally given some. Hamsters were kept in cracked enclosures. And other animals suffered from untreated eye problems, labored breathing, and hair and weight loss. This inspection included only a fraction of the more than 50,000 small mammals the Georgia Department of Agriculture found at Sun Pet one month later—and none of the more than 9,500 birds, approximately 1.5 million fish, or more than 52,000 reptiles, amphibians, and other animals. 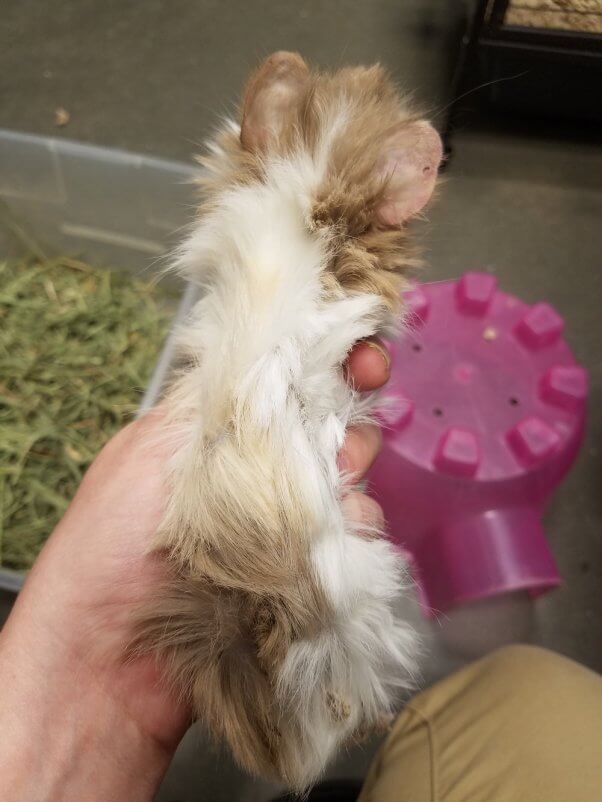 A PETA eyewitness found this underweight guinea pig, Waylon, dead five days after he arrived at a PetSmart store from Sun Pet.

In response to this recent USDA report, we wrote to PetSmart President and CEO J.K. Symancyk and Petco CEO and Chair Ron Coughlin, urging them to reconsider their companies’ relationships with Sun Pet and to stop selling live animals altogether.

“[W]e urge you to reconsider whether you wish to remain affiliated with such abject misery and neglect,” PETA Senior Vice President Daphna Nachminovitch wrote in a letter to Symancyk. “Regardless, what will it take for you to stop selling live animals altogether and instead promote the adoption of all animals and only sell supplies for them?”

PETA has been urging PetSmart and Petco to reconsider their relationship with Sun Pet and to end animal sales entirely for years.

PetSmart’s and Petco’s lack of conscientious action has repeatedly shown that we can’t depend on these chains to do right by animals, but we can take one simple step to help stop the suffering of animals in the pet trade: Never buy anyone or anything—not even a bag of treats—from stores that sell living, feeling beings. There are many companion animal supply stores and online retailers—like PetFlow.com, Target, and Wag.com—that don’t condemn animals to miserable lives and painful deaths. Click below to take more action: