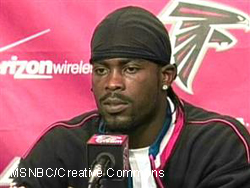 Like most people, I love to watch the man play football, but if the allegations I heard today are true, I’m not sure I ever want to see Michael Vick suit up for a game again. According to news reports, local and state law enforcement discovered more than 60 pit bulls and other dogs on Vick’s property in Surry County Virginia yesterday, who showed signs of serious abuse that is consistent with having been used for fighting. Officials also evidently discovered dogfighting paraphernalia, including a “rape stand” on the premises. These are deadly serious allegations, and it’s immensely distressing to see such a high-profile athlete accused of this kind of cruelty. PETA is calling on the Atlanta Falcons to immediately suspend Vick pending the outcome of the investigation, and if animals on his property are found to have been neglected or used for fighting, we’re asking that he be released from the team.” You can help out by clicking here to write to the Falcons about this issue, and for more information you can read our letter to Falcons Owner Arthur Blank.

The Atlanta Falcons should be kicking themselves right now that they traded away backup QB Matt Schaub this offseason, but even a year with Joey Harrington at the helm is better than having your team led by someone with a mark like this on their record.