After being forced to run an average of 100 miles a day for two weeks, many dogs will be suffering from conditions such as pneumonia, hypothermia, bruised and lacerated paws, upper respiratory infections, frostbite, inflamed wrists, and shoulder injuries. Nearly 150 dogs have died during the Iditarod since records started being kept, and that doesn’t include dogs who died after the race was over. Some dogs die of “sled dog myopathy”—literally being run to death. 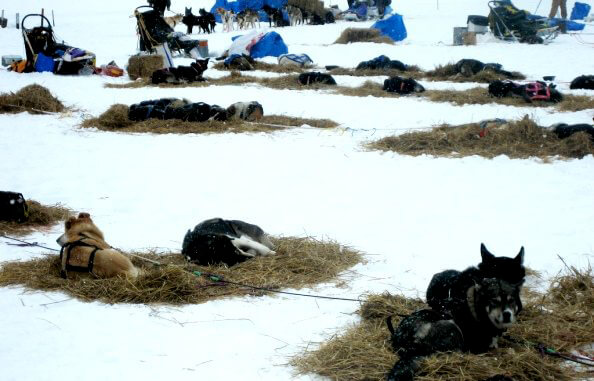 Although they won’t call it what it is—cruel—even mushers admit that the dogs suffer. During last year’s race, top contender Hans Gatt reported that half his team was “sick and eating poorly,” likely because of upper respiratory infections. Four-time champion Lance Mackey said that he didn’t know what was wrong with his dogs but that he had watched his “world-class dog team falling apart before my very eyes.” Paul Gebhardt had to forfeit the race when his dogs couldn’t continue because of dehydration, cramps, and injuries. And Zoya DeNure had to perform mouth-to-snout resuscitation on one of her dogs, who had collapsed in his harness.

So why do mushers continue to subject their dogs to the abuse of the Iditarod? Because thousands of dollars in cash and prizes are at stake. But the good news is that the purse is dwindling as corporations withdraw their sponsorship after learning about the Iditarod’s cruelty. Last year, thanks largely to PETA, the Transportation Security Administration pulled the plug on its $85,000 donation, and Chevron and Cabela’s both called it quits prior to 2010’s race.

Please share this with friends and family who may not realize how much dogs suffer for the Iditarod.