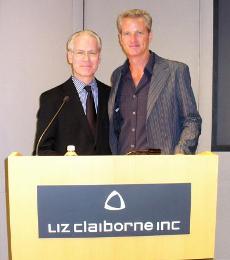 Not too many years ago, the only way PETA VP Dan Mathews could get a designer’s attention was by storming their office and painting slogans on the wall, or disrupting a runway show or two in his underwear (hey, I’m pulling this stuff straight from his memoirs). But now Dan seems to have a foot firmly in the door. After reading his new book, Liz Claiborne big wigs Tim Gunn (of Project Runway fame) and Anne Cashill invited Dan to be the featured speaker at the company’s monthly designer roundtable last week, which was attended by several of the company’s designers—many of whom work with leather, wool and even fur—as well as the company’s CEO, William McComb.

In honor of PETA’s visit, the company treated attendees to delicious homemade cookies in the shapes of foxes, beavers, and bunnies, with the words “Save Me” written in icing across the bottom. The fashionistas also received a copy of Committed and were aghast at the cruelty involved in creating animal-based “fabrics” as they watched PETA’s fur industry exposé hosted by former fur wearer Martha Stewart, our undercover Indian leather investigation hosted by Pam Anderson, and our Australian wool exposé narrated by Pink. One handbag designer at the event promised never to use leather again! He’s quite a charmer, our Dan. 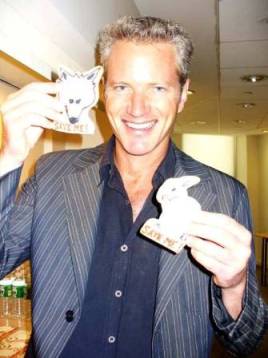