In what appears to be a violation of PETA’s First Amendment right to free speech, the city of Little Rock, Arkansas, is denying our application for a permit to display our crippled-chicken statue near a McDonald’s restaurant. 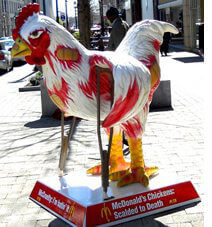 Is Little Rock afraid that the backup of people rubber-necking at the statue will cause a traffic jam? Or does it just not want its residents to learn that McDonald’s suppliers slam chickens upside down by their legs into metal shackles, often breaking their wings and legs, cut their throats while they are still conscious, and scald the survivors to death in defeathering tanks?

While we’re wrangling with Little Rock, you can e-mail McDonald’s and tell the company that you won’t be caught dead near an Unhappy Meal until its suppliers switch to the less cruel slaughter method that PETA is requesting.