It wasn’t your average Chicken Dance: A pink stretch Mini Cooper delivered a troupe of little people dressed as dancing chickens to a PETA protest outside a McDonald’s in New York’s Times Square yesterday afternoon. “I Am Not a Nugget!” declared each of the little “chickens” with signs and dance. 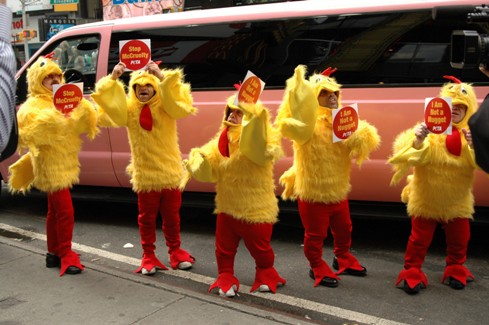 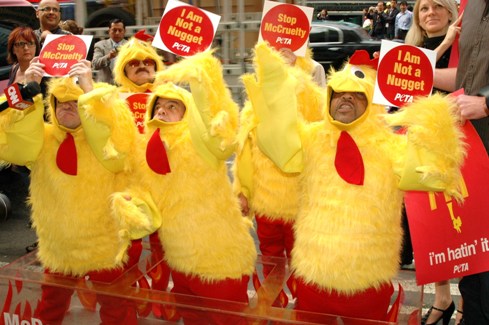 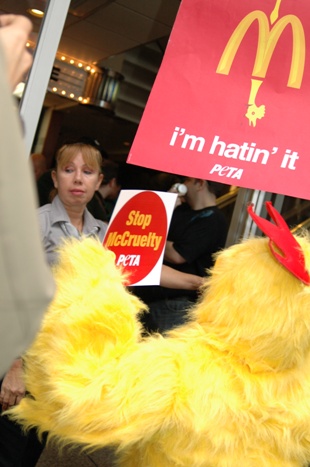 The “chickens” paraded in front of the restaurant and stormed the door when the manager opened it to scream at them to move. They all tried to get inside, causing a commotion and preventing anyone from getting in or out for several minutes. When someone put a box of McNuggets in the hands of one of the performers, he held up a nugget for the cameras and yelled, “They break our wings! They break our legs!” and then threw it on the ground.

Flocks of tourists watched the chickens perform their choreographed musical protest against McDonald’s suppliers’ outdated and outrageous slaughter methods, which cause millions of conscious birds to suffer broken bones and many to die in tanks of scalding-hot water.

McDonald’s European suppliers already use a slaughter method that renders chickens unconscious while they’re still in the transport cages—and two slaughterhouses in the U.S. have begun to implement the new system, controlled-atmosphere killing (CAK). But McCruelty still refuses to require its U.S. suppliers to upgrade to CAK. Until it does, PETA’s protests, both big and small, will continue. Please join us in speaking up for chickens.

A big thank you to Centerfold Strips, which approached PETA to volunteer its professional dancers for this protest!