The word on Twitter is that celebs are rejoicing over Ringling’s being slapped with the largest penalty in circus history for violations of the Animal Welfare Act. Other celebs are buzzing about going postal. 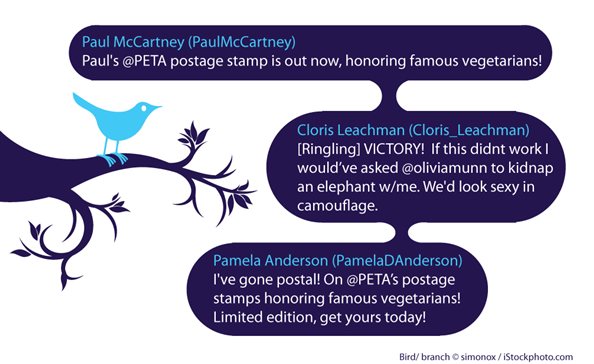 Chuck star Yvonne Strahovski gave dogs in animal shelters something to rejoice over, discussing her “Always Adopt, Never Buy” campaign with PETA in the winter issue of Modern Dog magazine and urging readers to hop on the adoption train. As if that weren’t enough, she then asked them to think about where fur comes from.

Morrissey and his bandmates left little doubt over what they think of fur when the band donned PETA shirts with a, ahem, choice message at a show in L.A.

Wearing fur is such a faux pas that designers are hard-pressed to find celebs willing to look like a permutation of Bigfoot. Reigning Sexiest Vegetarian Kristen Wiig says she will “never wear fur,” and cruelty-free fashion designer Stella McCartney snagged the Red Carpet Award at the British Fashion Awards for her fur- and leather-free designs.

This week, animals lost a great advocate when comedian Patrice O’Neal passed away. “I am … [an] extreme animal lover,” he once said. “I get sick when I see animals suffering.” Farewell, friend.