Who shot J.R.? Currently, TNT is shooting the Dallas patriarch for the reincarnation of the show coming next summer. And Larry Hagman is having a reincarnation of his own off the set: Switching to a vegetarian diet is helping him fight cancer.

Bob Barker and Jorja Fox are waging a fight of their own—for the elephants, tigers, and lions who are forced to spend a lifetime in chains just so that people can have a few minutes of “entertainment.” The pair traveled to Washington, D.C., to ask congressional representatives to support the Traveling Exotic Animal Protection Act, which would bar circuses from using wild animals.

The Toronto Maple Leafs’ Mike Zigomanis might call himself a lover, not a fighter. The decorated Most Gentlemanly Player takes his thoughtfulness to the kitchen, too, where he whips up amazing vegan smorgasbords that make us nonchefs feel as inferior as his opponents do on the ice.

You’ll find no fur on Placebo drummer Steve Forrest, who stars in a new anti-fur ad for PETA U.K.: 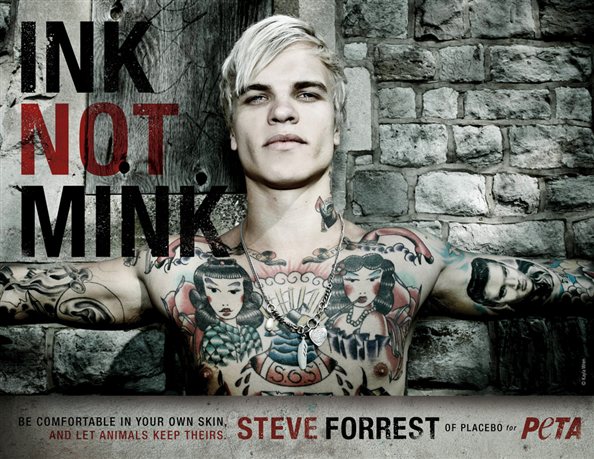 Fellow fur foe Leona Lewis is launching her own Project Runway of sorts, offering aspiring designers a chance to create an outfit that she will wear on tour and be photographed in. And she has specified that the designers must “make it work” without harming any animals—Leona only wears cruelty-free fashion.