Maybe you remember this phrase from your childhood: “Liar, liar, pants on fire, nose as long as a telephone wire.”

Well, does that apply to Giorgio Armani, or did he hit his head—causing him to have a drastic about-face? Because the Armani who was once swearing off fur is now dressing babies in it just one short year later. Note to Armani: Rabbits are furry animals no different from dogs, cats, foxes, and minks.

So, shoppers who were on their way into his flagship store in Milan were treated to a glimpse of how Armani looks to us now that he apparently can’t break his rabbit habit. PETA Europe posted this rather pointed portrayal of Pinocchio Armani just outside the store: 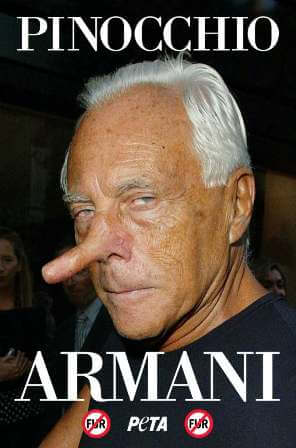 Because, seriously, what kind of person learns about the cruelty of the fur industry, pledges to be fur-free, and then decides to kill animals for “fashion” anyway? You tell us.