As one of the first apes to use American Sign Language, Koko is the most famous gorilla in the world and has taught humans a lot about interspecies communication. But the lessons have come at a high cost to Koko, who is reportedly held in solitary confinement in a facility that doesn’t properly meet her needs. She doesn’t need kittens for her birthday, as this viral video shows her receiving, but the company of other gorillas and a more natural and enriching environment in an accredited facility.

Koko currently lives at The Gorilla Foundation in California, and although her caretakers seem to adore her, the facility has been cited numerous times by the U.S. Department of Agriculture for its deteriorating facilities and even improper veterinary care for the gorilla, including one alarming instance in 2014 when she was described as not feeling well and was said to be unwilling to use her legs, with reduced function in one of her arms, but wasn’t examined by a veterinarian.

In August 2015, the USDA slapped The Gorilla Foundation with an official warning after finding violations relating to the foundation’s failure to clean its facility adequately during six different inspections. 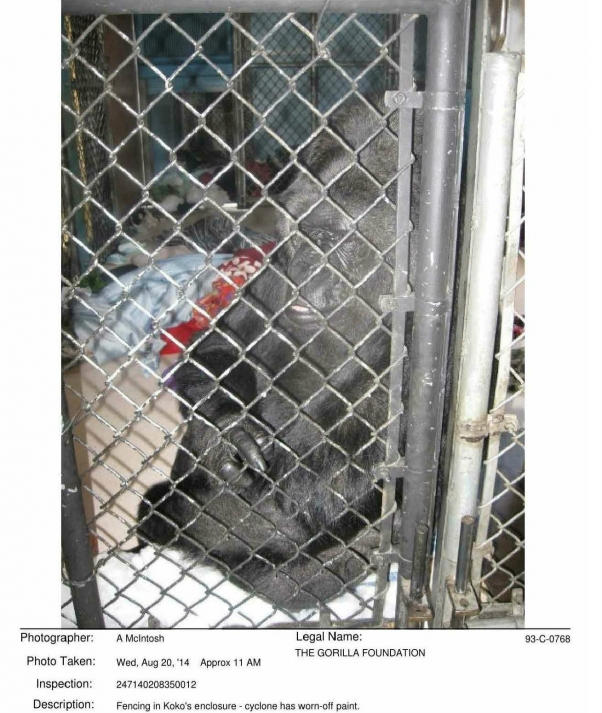 Photo of Koko from 2014 USDA Inspection

The foundation claims that she “chose” Ndume, a male gorilla, to be her mate via what it called “video dating.” However, since he was brought to California nearly 25 years ago, reports indicate that the two gorillas have not been successfully integrated with one another and that both these highly social animals now spend their days in solitary confinement.

Gorillas belong in the wild or at the very least in an accredited facility that provides a naturalistic habitat, opportunities for social interaction with other gorillas, and adequate veterinary care, which The Gorilla Foundation has failed to do. Koko may have gotten kittens for her birthday, but what she deserves is a better, more natural environment and the chance to live like a gorilla.