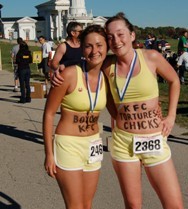 Lindsay and Nicole, a couple of die-hard anti-KFC campaigners, completed the Louisville Half-Marathon in KFC’s hometown yesterday. So what, you ask? Well, they did the whole thing with “Boycott KFC” and the like written on their bodies, and the pair reported that they got tons of support from the crowd and even talked to several Yum (KFC’s parent company) employees along the way, including one particularly chatty woman who wanted to debate around mile six. Of course, she couldn’t defend KFC, since you can’t really defend a company that refuses to take even the smallest steps towards improving the miserable lives and deaths of the animals killed for its products, despite the fact that its own animal welfare advisory board recommends the changes, and other industry giants like McDonald’s, Burger King, Wendy’s, and scores of others, have already taken similar action. 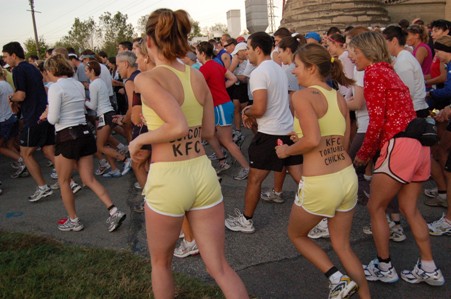 And on a totally unrelated note, Wu Tang Clan member RZA walked away with the crown in the Hip Hop Chess Federation’s first annual Chess Kings Invitational. Lucky for RZA that I didn’t know about it in time to enter!