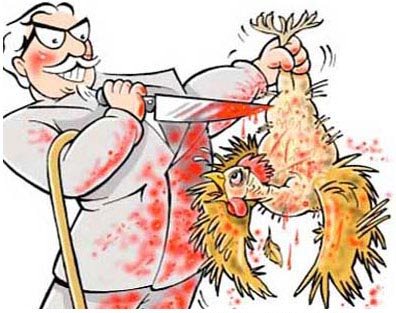 In the course of negotiations with a company like KFC—which refuses to make even minimal improvements in the lives of the billions of chickens it uses for profit—there is a time for subtlety and there’s a time for burning their corporate logo in effigy. This past week turned out to be of the latter sort. Check out the pic below from our awesome protest in Washington:

In related Colonel Sanders effigy news, I just discovered that PETA isn’t the only organization that has a longstanding KFC boycott. According to those omniscient folks over at Wikipedia, a Japanese baseball team called the Hanshin Tigers has failed to win a championship in more than 18 years due to what fans call “The Curse of the Colonel.” Apparently their run of bad luck started when a crowd of Tigers fans threw a Colonel Sanders statue into the river as part of a celebration.

So in case you’ve been looking for some more reasons to join PETA’s KFC boycott—in addition to the fact that KFC kills millions of chickens a year by boiling them to death—you can do it so that the much-maligned Hanshin Tigers can finally win the championship that has been stolen from them by a company that has nothing but contempt for animals, consumers, and Japanese baseball.