With the holiday shopping season in full swing, PETA has placed a new #WoolFreeWinter billboard reminding Milwaukee motorists that wool belongs on sheep—not humans. The billboard features a photograph from a PETA exposé of the wool industry. 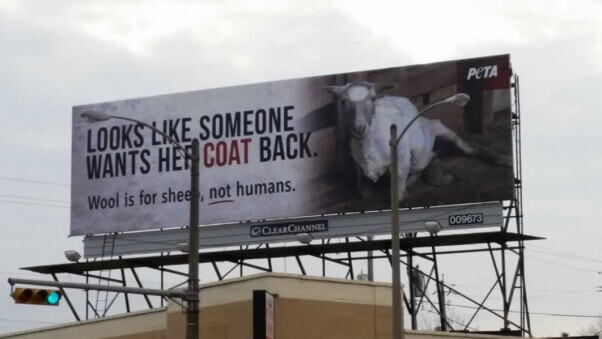 PETA’s latest video exposé reveals that workers on a massive sheep farm in Australia cut flesh off sheep’s backsides with shears and throw and kick the animals—and that’s just the tip of the iceberg. In the past 16 months, PETA has released five exposés recorded at 37 facilities on three continents revealing that sheep are mutilated, abused, and skinned alive—even for “responsibly sourced” wool on so-called “sustainable” farms. Shearers are often paid by volume, not the hour, which encourages fast, violent work that can lead to gaping wounds on sheep’s bodies, which workers stitch closed—without giving the animals any painkillers.