Quick—who was the first NBA player to win championships with three different teams? If you said John Salley, then … you read the title of this post. Bravo. But you know what else John Salley is? … right. A vegetarian. That was in the title too. You know, you really could help me sell this bit a little. Anyway …

John Salley—who earned his nickname, “The Spider,” from his long-limbed defensive prowess—is the latest celebrity to star in PETA’s vegetarian testimonial series. Today, the PSA will be launched at the John Muir Middle School in Los Angeles, California, where John is giving a talk to hundreds of students about his vegetarian lifestyle and PETA is providing free veggie burgers for one and all. Turtle Mountain also provided the school with 500 soy ice cream sandwiches for the event! Check out the PSA below:

When we filmed the ad a while back, I got the chance to sit down with John and pick his brain a bit. We got the important stuff out of the way when he told me that he grew up a Celtics fan—I always knew I liked the guy. He first went veg in 1991, after his fifth year in the league (he was a Detroit Piston at the time, but please don’t hold that against him). John says that after making the switch, he lost 10 pounds and was still stronger than anyone else on the team (Laimbeer, I’m looking at you). From there, he went on to win powered-by-tofu NBA championships with the Bulls in ’96 and with the Lakers in ’00, adding those rings to the two he already won with the effing Pistons. Check out the full Q&A below:

Seventeen years later, John’s still going strong, hosting The Best Damn Sports Show Period on FOX, pursuing an acting career, and oh yeah, helping to save animals with PETA. So the next time someone asks you, “Aren’t vegetarians worried about not having enough vitamin Q?” or whatever, just say, “Actually, we’re more worried about not having enough fingers for all our RINGS, yo!”

Here are some photos from the launch event: 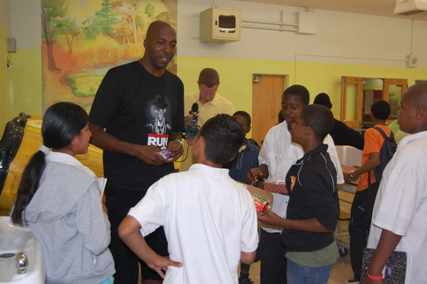 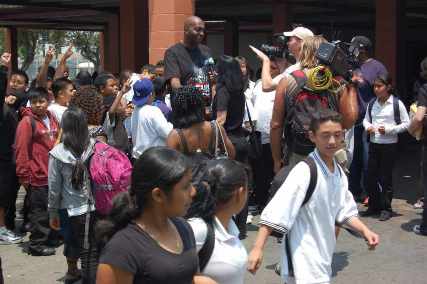