Earlier this year, when I announced that I was, officially, the greatest Dr. Mario player in history, my good friend Joel Bartlett was completely unimpressed. But now that the folks at OMMA magazine have decided to name him one of their “Rising Stars”, he’s acting as if it’s suddenly just the coolest thing to be officially recognized for doing what you do best.

Joel, whom regular readers will know from his often rather lowbrow but occasionally inspired posts on this very blog, is the brains behind PETA’s online marketing strategy, and—to be fair—OMMA (which stands for Online Media Marketing and Advertising) magazine were right on in recognizing him for his work. Because he really is infuriatingly talented. Here’s what they said: 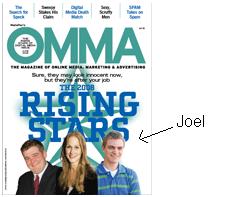 “In his five years at PETA, Joel has used his online marketing savvy to throw haterade on the Olsen twins, flaunt some sexy vegetarians and boost PETA’s advocacy campaign participation by 90 percent last year alone. But he’s particularly fond of “Super Chick Sisters,” PETA’s online video game spoof, for “calling kfc out for the company’s abusive practices, like cutting off chickens’ sensitive beaks, all while staying fun.”

It takes a few seconds to fill out their webform, but the full OMMA article is definitely worth checking out if you’re interested in marketing, PETA, Joel, or all of the above. In the meantime, since this post is rapidly degenerating into a Joel Bartlett lovefest, I figured I’d just give in and congratulate him myself. He may never be quite as skilled as I am at medicine-themed, 8-bit Nintendo games, but the guy is unbelievably good at what he does, and he deserves the hell out of this recognition. Nice work, JB.