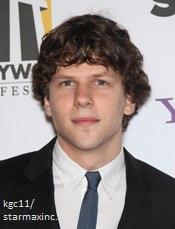 Jesse Eisenberg, the critically acclaimed star of The Social Network, isn’t just known for his comedic wit and acting chops. The newly minted vegetarian and reigning “Sexiest Geek Alive” is also a foster parent to homeless cats. All together, girls: aaaaaaaaaaaaw.

During a recent appearance on Conan, Jesse said, “I have two [cats] now, but I’m on a list where they can deliver them to the house. To be a foster parent for cats is basically to have tenants coming in and out. I have a lot of cats, a lot of cat food, a lot of litter—and nothing else in the apartment.”