Yesterday, it was packets of high protein vegan jerky that PETA staff delivered to the militant cattle ranchers occupying Malheur National Wildlife Refuge, and today, we’re going back with a message of “conversation over conflict” to dish up protein-packed vegan chili—this time intended for law enforcement, Native Americans, and others on site in the hope that the slaughter of cattle and wildlife will become a focus of discussion. PETA will also take along signs pointing out the clearly devastating effects of animal agriculture on the environment. 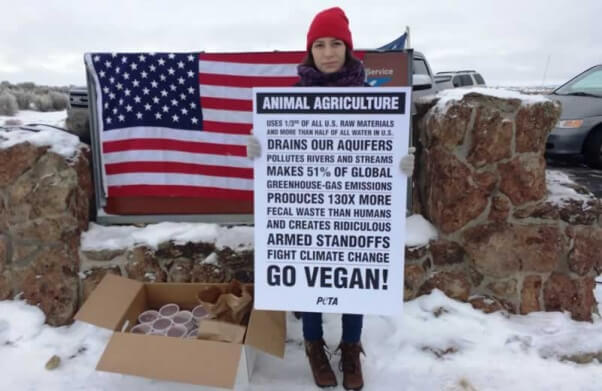 “PETA gave militia members their first taste of vegan chow, and now we’re extending a thank-you to law enforcement and witnesses who are outside the refuge land,” says PETA President Ingrid Newkirk. “PETA stands with Oregon’s diverse and mostly nonviolent population, with the cows who do not want to die for a fleeting taste, and with the birds who’ve migrated long distances to rest there and who have the real claim to this special place.”

Raising animals for food is a leading cause of water pollution and land degradation, and the United Nations reports that a global shift toward a vegan diet is vital if we are to combat the worst effects of climate change.