Gianfranco Ferré, one of Italy’s most well-known designers, died this weekend of a brain hemorrhage in a Milan hospital at the age of 62. When I heard the news this morning, I knew that PETA VP Dan Mathews—who famously crashed a Ferré fashion show wearing a priest costume and holding a “Thou Shalt Not Kill” sign a few years ago—would have something to say about it. And so he did. This is from the letter of condolence that Dan sent to the company:

“I hope Mr. Ferré’s death is the last death at the company, and that the new design chief eliminates all the dead skin from upcoming collections. I hope that during this sad time of reflection they’ll see more clearly how the fashion house can be creative without being destructive.”

I think that sums things up rather nicely. Sad as it is, I hope the designers at GF Ferré will see this as an opportunity for a fresh start. I’m sure Gianfranco Ferré wasn’t a bad person, despite his inability to see how much suffering he was causing, but that doesn’t mean that his bad habits shouldn’t be buried with him. 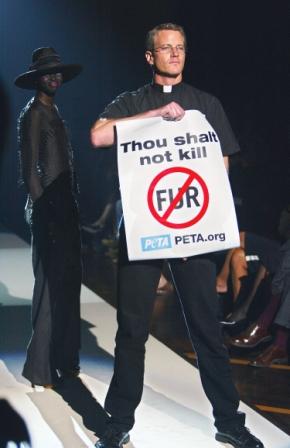 Dan Mathews at a Gianfranco Ferré show in 2004