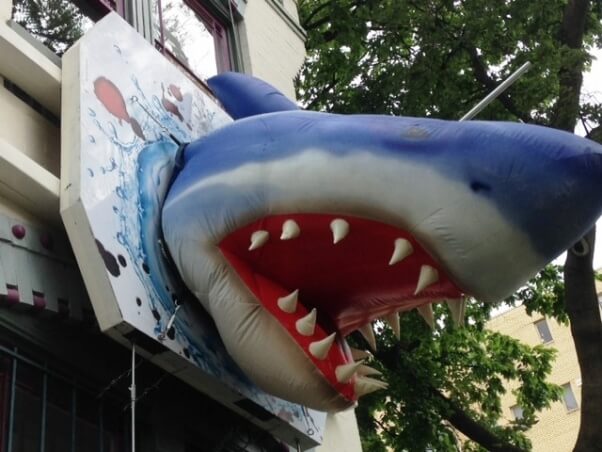 That means lots of mega-predators looking up at a shark! Which is our point. Instead of thinking of a shark as a mega-predator, we should look in the mirror and consider changing our own behavior. Sharks can’t change theirs, but then the number of their kills pales in comparison to ours. 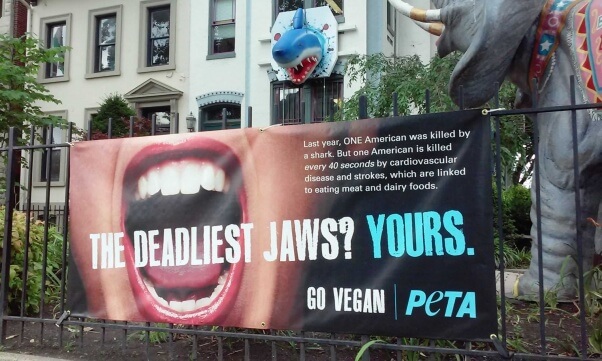 Did you know that, on average, sharks kill about five humans a year? Yet in the same amount of time, humans kill 100 million sharks. Up to 73 million sharks are used just for shark-fin soup each year. The animals captured for this “delicacy” are typically dumped overboard after their fins are cut off, leaving them to die slowly in the water.

Humans also kill and consume trillions of other marine animals each year. Most fish sold in restaurants and supermarkets are caught using enormous commercial fishing nets, which can be miles long. Dropped into the ocean, these nets swallow up everyone and everything in their path, including fish, sharks, dolphins, turtles, and coral. As they’re hauled up from the deep with hundreds of other animals, fish may be crushed to death or suffer from catastrophic decompression—their gills collapse, their eyes bulge out of their heads, and their swim bladders burst. Those who survive the trip to the surface will be slaughtered or left to suffocate on the decks of boats.

You’re far more likely to experience a heart attack than a shark attack. Protect sharks, other sea life, and your own health by pledging to go vegan today.