It’s not just in the U.S. that shelters and rescue groups are struggling to save all the dogs abandoned by hunters after hunting season is over. Animal advocates in Spain are asking people to help as they try to rescue up to 50,000 galgos, close relatives of greyhounds, who are dumped as the season comes to a close.

Hunters reportedly abandon the dogs—who are often injured and malnourished—and leave them to die by dumping them on busy roads, throwing them down wells, tying them to railway lines, and using other savage methods. Rescuers say dogs who don’t perform are often disposed of so that hunters don’t have to feed them.

“They are brutally treated when the hunters have finished with them—some are thrown down wells and the well opening is blocked off with wood,” says Anna Clements of the SOS Galgos rescue group in Barcelona. “But some survive and we had one recently who was saved when a passerby heard her cries. She was lying in water at the bottom of the well, was badly malnourished and had deep gashes on her neck. The fire brigade was able to winch her to safety, and she is now recovering with a family where she is a loved [companion].”

Clements, whose husband helps treat the dogs in his veterinary office, adds that even when hunters keep the dogs, “[t]hey are often kept in dungeons in the dark for most of the day and fed poorly so they are more eager [for] prey when they are let out.” She concludes, “the answer is a complete ban on hunting with galgos.”

PETA will continue to advocate for bans on hunting, such as the one that Colombia recently passed.

The following was originally posted on January 31, 2019:

“Hound dumping” is yet another way hunters hurt and kill animals. In a vulgar display of callousness, many simply abandon their own “hunting dogs” in the woods when the season is over or when the dogs won’t help track down animals for hunters to kill.

Hound dumping occurs across the country. In Glen St. Mary, Florida, the problem of hunters abandoning dogs has gotten so serious that rescuers report that they’ve saved at least 100 in the area over the past year alone. They find the dogs severely emaciated, and many have skin issues, including mange and open wounds. Hunters have also abandoned them with broken bones and gunshot wounds—this dog found by a PETA rescuer had been left to die with a broken back. 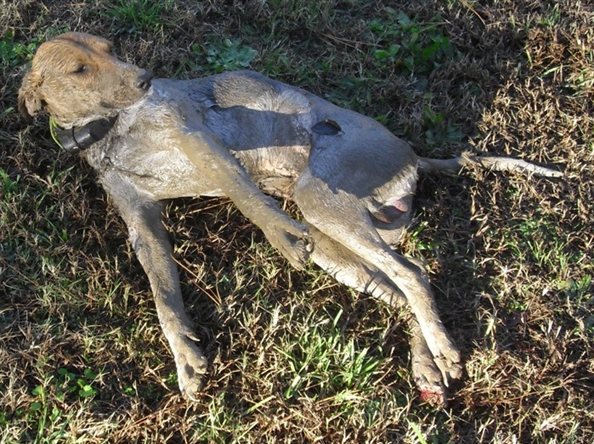 Dogs (and All Animals) Deserve Better

Hunters love to spout the tired old lines about “conservation” and “population control.” But wildlife “management” agencies frequently kill animals such as wolves who rely on deer and other animals for survival in order to ensure that more targets are available for hunters’ guns and bows. And “overpopulation” of many species only occurs because humans continue to encroach on their homes and take over their dwindling habitats.

Gunning down animals for fun and leaving their own dogs to die in the woods? It’s pretty clear how hunters truly feel about animals.

UPS: Animals Are Not Trophies