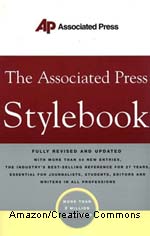 As a former editor, I’ve spent a whole lot of time poring through a little tome called The Associated Press Stylebook. Along with its rival, The Chicago Manual of Style, the book is a thing of beauty, gleaming with helpful tips about when and when not to put an apostrophe after an “s” and whether it’s ever OK to split an infinitive (the answer is sometimes, if you’re feeling subversive). But there’s one important issue the AP Style gurus haven’t properly addressed, which bears directly on our work here: Animals are still commonly referred to as if they were inanimate objects. And since nobody likes being called an “it,” we dashed off a little letter to them yesterday, which has already been getting some good coverage. My own letters to the AP asking them to ban the word “utilize” and take a stronger stance on misuse of the subjunctive have thus far been ignored, but I haven’t given up hope yet. You can check out our letter below. I love that we included our own style guidelines for them to peruse.

April 26, 2007Norm Goldstein, Editor The Associated Press450 W. 33rd St.New York, NY 10001Dear Mr. Goldstein:On behalf of PETA’s more than 1.6 million members and supporters worldwide, I am writing to request that you revise The Associated Press Stylebook so that its grammatical rules reflect the fact that animals are living beings rather than inanimate objects. In magazine articles, popular literature, and advertising, writers are using “he,” “she,” and “who” to refer to animals—instead of the outdated and inaccurate “it” and “which.” Won’t you consider making this transition as well? As “the essential global news network,” the Associated Press (AP) should take a progressive step and give animals the respect that they deserve by revising AP style guidelines to reflect the usage of personal pronouns for all animals.While the world accelerates through the 21st century, progressive ideas are challenging and changing conventional perspectives. Recently, the American legal system recognized that nonhuman animals deserve legal status beyond that of mere “property” and that abusive treatment of animals is more than simple vandalism. The public now recognizes that whales, who sing across oceans; great apes, who share more than 98 percent of our DNA; sheep, who can recognize as many as 50 faces after not having seen them for two years; and pigs and chickens, who can learn to operate switches in order to control heat and light in factory-farm sheds, are feeling, intelligent individuals—not objects. Our language should reflect this. I would greatly appreciate hearing your decision on this matter. Enclosed is a copy of “PETA Writing Style and Guidelines,” which explains how to avoid language that portrays animals in a negative light.Thank you very much for your time.Sincerely,Anna WestDirector of Written Communications