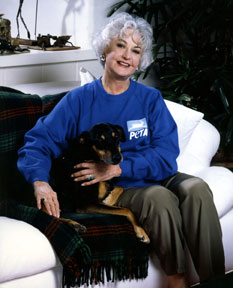 People have lost one of the greatest comic actresses of all time, and animals have lost one of their all-time greatest defenders. An honorary PETA director and the winner of multiple PETA Humanitarian Awards, Bea Arthur joined PETA in 1987, when the Golden Girls did an anti-fur episode and Arthur, Rue McClanahan, and Betty White filmed a PETA anti-fur PSA on the set of the show.

A tireless advocate for animals, Bea campaigned against the force-feeding of ducks in the foie gras trade, travelling to London with PETA President Ingrid E. Newkirk, where she called on Harrod’s to stop selling the cruelly made pâté. She was particularly upset about fur and used to place ads in playbills calling for theater patrons to have a change of heart and donate their furs to PETA. Bea recently called for a boycott of KFC until it improves the way it raises and kills its chickens, campaigned against animal experimentation, spoke out about the abuse of animals on factory farms, and was a vocal opponent of the use of exotic animals in circuses. She also helped launch and was a member of PETA’s Augustus Club, which helps members remember PETA in their estate plans and wills.

She will be sorely missed.