Confined to barren, muddy pens with no protection from the elements, no food, and no water, the nearly 70 dogs owned by Cajun Country “Ranch and Animal Rescue” in Wilburton, Oklahoma, were struggling to survive. Their skin was stretched tightly over their rib cages, and fleas and ticks had ravaged their bodies. The horses on the property fared no better, their bones clearly visible. The bones of dead dogs lay piled up like leaves, and more bones were scattered throughout the property.

When PETA received a tip-off, we alerted local officials, who told us that they shared our concerns. One of our contacts in the area was an expert on hoarding situations, and after he surveyed the property for us, he confirmed our fears about the “rescue.” 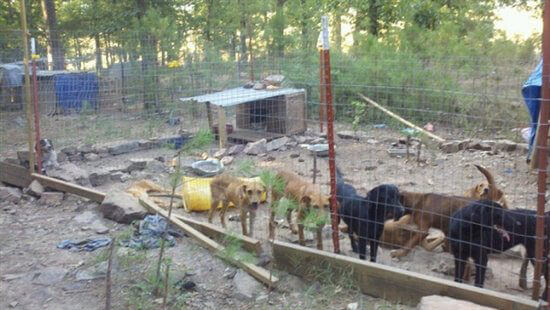 The next day, armed with a warrant, police raided the property and arrested the owners, Anne Marie and Shane Duhon. According to news reports when police entered the couple’s home, they found three children living in squalor. Animal feces covered the house, including the children’s beds, and cockroaches crawled across the littered floor. Reportedly, the children were covered with bites from fleas, ticks, and other insects. While the Department of Human Services took the children to a safe location, a multitude of volunteers, mobilized by PETA supporters in the area, came in with horse trailers and kennels and moved all the animals to awaiting reputable rescues and animal shelters.

Some of the animals were so far gone that they needed to be euthanized. At trial, the Duhons pleaded guilty to child neglect and cruelty-to-animals charges. They were put on probation for five years, banned from having any animals during that time, and told that if they violated the terms of their probation, they could face prison time.

While animal hoarding behavior stems from a desire to “save” animals, hoarders’ mental illness causes them to keep amassing animals, and well-meaning people encourage hoarders by giving them animals and/or money. They end up with far more animals than they are capable of caring for—with disastrous, deadly consequences for their victims. If you suspect that a local “rescue” is actually a hoarder, alert animal control or PETA immediately.